India will take on arch-rivals Pakistan in the opening match of Group 2 of the Super12 stage in the ICC Mens T20 World Cup on October 24 in Dubai at 6pm local time, the ICC confirmed. The tournament will commence a week prior to that blockbuster encounter with hosts Oman taking on PNG in their Round 1 Group B clash. Scotland and Bangladesh, the other two sides in the group, will meet in the evening game on the same day.

Sri Lanka, Ireland, Netherlands and Namibia are the teams present in Group A. The Round 1 matches will take place until October 22, with the top two teams in each group progressing to the Super12 stage of the tournament which kicks off with Australia taking on South Africa - two teams searching for their maiden title. England and West Indies - finalists of the previous edition - will lock horns on the same day in Dubai in an evening clash. All four teams are present in the same group in Super12.

Traditional rivals - England and Australia - will face off in Dubai on October 30. The group will conclude on November 6 with Australia playing the West Indies in Abu Dhabi, and England taking on South Africa in Sharjah.

In the other Super12 group, Afghanistan will begin their campaign on October 25 at Sharjah where they will play the winners of Group B from the first round. New Zealand kickstart their campaign at the same venue the next day against Pakistan. The group will conclude on November 8 with India meeting the second-placed team from Round 1 of Group A.

Here is the schedule: 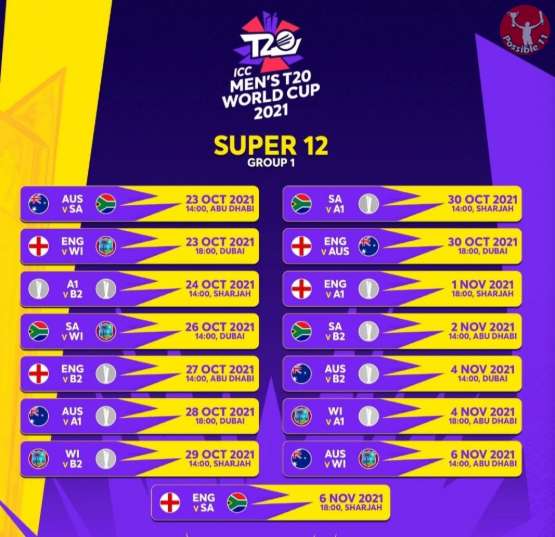 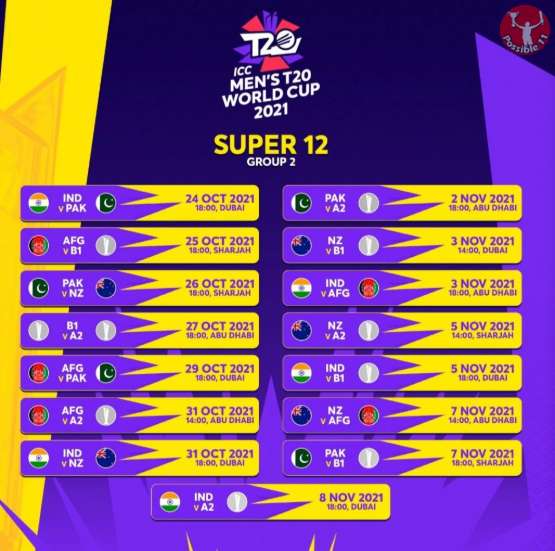