Why Indian cricketers are not allowed to play in foreign leagues? 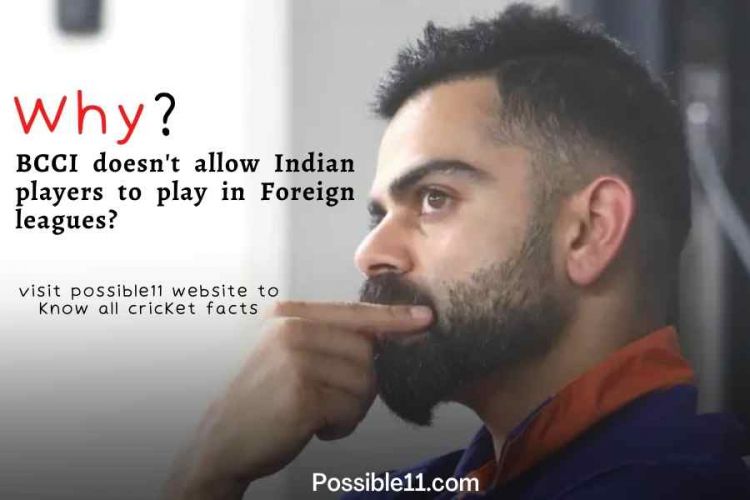 The BCCI is the undisputed king of cricket, accounting for more than 60% of the ICCs revenue. The Indian market is as profitable as it gets in every industry, whether it is IT, e-commerce, or social media. Its like a diamond mine in cricket. The Indian public adores the game known as cricket. The craze is such that anyone who claims to not know Dhoni or Virat Kohli is labelled a traitor or stupid.

Every country wants to play a series against India in order to generate revenue. Because of the Indian teams strong performances around the world, particularly in the shorter formats, the team attracts a large number of spectators from other countries.

Why Indian Players only play IPL? The IPL is a world-renowned league, and every player wants a piece of it because he can earn a lot of money in just two months. No other league pays a higher salary to a player for such a short period of time.

The success of the IPL has led to franchise owners entering other leagues, and the upcoming CSA T20 league is set to be an all-India affair. The six teams in the IPL, which is set to begin next year, are owned by the IPL team owners. The owners of IPL teams have also established themselves in other leagues.

The BCCI was initially sceptical of T20s success in India, but after the Indian team won World T20 in 2007, it recognised its value and launched the IPL in 2008. From the first edition onwards, the IPL has grown in terms of revenue and spectator count. Despite allegations of match fixing and the suspension of two of its most popular teams, the IPL brand has grown steadily.

Following the success of the IPL, many countries established their own leagues, but they are nowhere near as popular as the IPL. This can be attributed to three main reasons:

Totally agree.. Foreign players play the IPL and get used to the conditions which benefits them in future..But Indian players dont play global leagues and that is the reason why Indias pool of players have very limited experience compared to players from other nations..

Dr Harry Harinath, a former director of Cricket Australia (CA), called on the Board of Control for Cricket in India (BCCI) officials to release Indian players for the Big Bash League (BBL) around 2010. CA intended to have at least one Indian cricketer in each BBL franchise.

The BCCI anticipated the looming reality of allowing Indian players to compete in the BBL, or any other foreign league for that matter. It believed that Indian participation in overseas leagues would result in more eyeballs in India and a higher media rights value. It would be a self-defeating move.

Another reason is the issue of burnout. Indian players play a lot of cricket, especially in the shorter formats, which is extremely taxing on the body. This has already been raised by key players such as Virat Kohli. As a result, the BCCI wishes to protect its players from injury and burnout.

Also Read: After the defeat of the semi-finals, now there will be a change in Team India