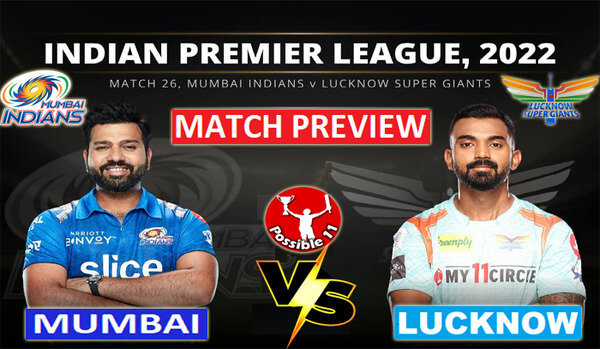 Mumbai Indians team, which has won the Indian Premier League title 5 times, has had a bad start in this tournament. The team has faced defeat in five consecutive matches. In the last match, the Mumbai Indians team lost by 12 runs against PBKS team, due to which they are at the last position in the points table. On the other hand, LSG team also suffered a 3-run defeat against the RR team in the last match LSG team is at fifth position in the points table with 6 points.

Quinton de Kock, Deepak Hooda have been in very good form in this tournament so far from the LKN team, in this match too the team expects them to perform well. On the other hand, Rohit Sharmas poor form remains a matter of concern for the Mumbai Indians team, which has so far failed to perform to the best of his ability. To keep their hopes alive in this tournament, the match is going to be very important from the point of view of Mumbai Indians, in this match, the team needs a big score from Rohit Sharma. Both the teams will enter the field with the intention of registering a win by performing brilliantly in this match. 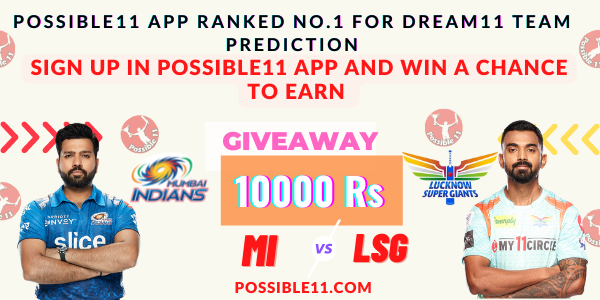 On 16 April, that is, the first double-header thriller was seen between Mumbai Indians and Lucknow Super Giants (MI vs LSG) on Maha Saturday. There will be Rohit Sharma on one side and KL Rahul on the other. This match between the two captains and their teams will be played at the Brabourne Stadium in Mumbai. This match is going to be more important for the Blue Army than the Lucknow team. Because now all the limits of delay for victory have been crossed. If further victory is to be registered, then the franchisee will have to change their track and leave the defeat and step on the track of victory.

Talking about Ishan Kishan, in the last three matches, he has been seen battling only to score runs. Captain Rohit has also not been able to do anything special and the opening pair of the team has failed to get a good start so far. Devald Brevis has played a good inning in the last match and Tilak Verma has also impressed with his batting. Apart from this, if Mumbai is looking for victory only because of Surya, then it is impossible. Because the bowlers have failed to leave their mark in all the five matches so far.

Captain Rohit, not scoring runs is the biggest concern of Mumbai (MI vs LKN)

The biggest problem for Mumbai is the poor form of captain Rohit. Rohit has not been able to do much with the bat this season. He has scored 108 runs in five matches. Apart from them, poor performance of bowlers is also responsible for Mumbais defeat. Ishan Kishan batted well in the first two matches, but after that his bat has also become silent. Devald Brevis, Tilak Verma, and Suryakumar Yadav have batted well in the middle order but have not been able to lead their team to victory so far.

On the other hand, Lucknow Super Giants (LKN) will also not want to tolerate defeat in any way. Only and only victory will be going on in the mind of this team and even then why not. Because the season is moving towards the playoffs. From here the impact of victory and defeat will not only be on the point table but also on the playoffs. Therefore, Lucknow would like to strengthen their position by registering a win against Mumbai Indians (MI vs LKN). Lucknow Super Giants (LSH) will land to play their sixth match. Earlier, the team has won 3 out of 5 matches and is at the 5th position in the points table.

In such a situation, if the team led by KL Rahul is successful in defeating Mumbai, then their maths will improve further. LSG had suffered a close defeat against Rajasthan Royals in the previous match. Dushmanta Chamira and Ravi Bishnoi proved economical in the bowling in the last match. Apart from these, Avesh Khan and Krishnappa Gautam also bowled well. Although Quinton de Kock and Marcus Stoinis had scored runs in the batting. But, due to the failure of the batsmen, the team is a few steps away from victory.

LKN strengthens with the arrival of Stoinis (MI vs LKN)

The team of Lucknow (LKN) had to face defeat in the first match of the season. After this the team recovered and registered three consecutive victories. In the fourth match against Rajasthan, this team lost by three runs. For Lucknow (LSG), the pair of KL Rahul and De Kock are showing a good game. Deepak Hooda and Ayush Badoni have batted well in the middle order. With the arrival of Stoinis, the team has become stronger. Now Badoni and Stoinis can end the match in the right way.

Big scores have also been seen being made on this pitch in this season. That is, one thing is clear from this that a long score can be made on the field and it can also be achieved easily. The wicket will be friendly to the batsmen and will also give a lot of help to the outfield batsmen. Along with this, spin bowlers will also get help from this. Batting in the second innings here can be a good decision for the team. So the team winning the toss would like to decide to bowl first.