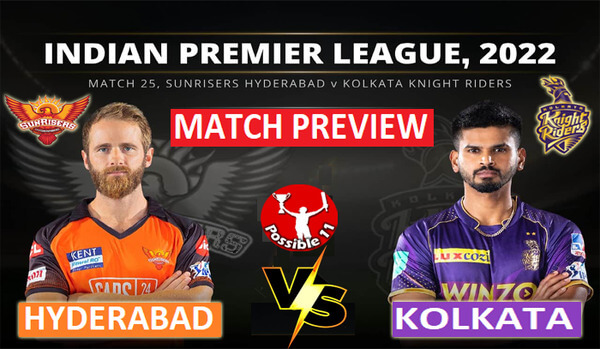 There is a big match to be played in IPL 2022 today. Young Shreyas Iyer will be in front of veteran captain Kane Williamson. On one side will be the two-time IPL champion team KOL and they will face the team of Sunrisers Hyderabad, once a champion. One can get to see a tough match between both the teams. Sunrisers Hyderabads team is currently at number eight in the points table, while KKRs team is occupying the second position. Todays match is going to be very special for both the teams.

The team of Sunrisers Hyderabad, captained by Kane Williamson, has played four matches so far this time, but the team has won only two matches and has also faced defeat in two. That is, the team has four points at this time. On the other hand, Kolkata Knight Riders have won three out of five matches and have a total of six points. Sunrisers Hyderabad played their last match against Gujarat Titans and defeated Gujarat Titans badly by eight wickets in that match. So far only Sunrisers Hyderabad has defeated Gujarat Titans. On the other hand, KOL played their last match against Delhi Capitals and KKR had to face defeat by 44 runs. That is, where another KOL team is entering the field after losing today, the team of SRH will enter the field with victory and high spirits. 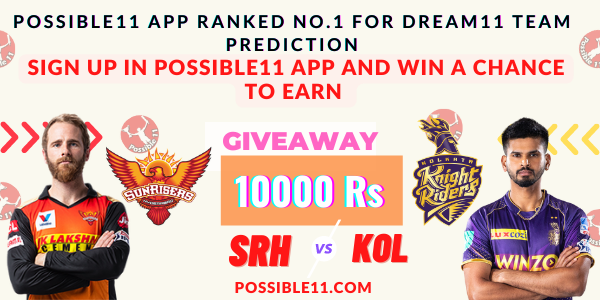 SRH vs KOL Head to Head:

This match between Kolkata Knight Riders and Sunrisers Hyderabad (KKR vs SRH) is going to be even more exciting. The competition between these two teams has always been a close contest. So far in the history of IPL, if the clash between the two is seen, then KKR has always dominated SRH. You can guess this by looking head to head.

Both the teams have met in 21 matches so far, out of which the result of 14 matches has been in favor of Kolkata, while on the other hand Hyderabad has won only 7 matches. That is, according to head to head, the Kolkata team is going to have a heavy upper hand. But it would not be right to underestimate Hyderabad because the franchise has performed tremendously in the last two matches.

Abhishek Sharma is a left-handed batsman and left-arm orthodox spinner from Sunrisers Hyderabad. He has smashed 139 runs in this tournament so far and can turn out to be effective once again here.

Kane Williamson is a right-handed batsman from Sunrisers Hyderabad. He has smacked 107 runs in this tournament so far. He will be hoping to play a significant role with the bat here as well.

Shreyas Iyer is a right-handed batsman from Kolkata Knight Riders. He has stacked 123 runs in this tournament so far and can capitalize on another good start here.

Andre Russell is a right-handed batsman and right-arm fast bowler from Kolkata Knight Riders. He has hammered 130 runs and took 3 wickets in this tournament so far. He will be among the top fantasy picks here.

Umesh Yadav is a right-handed batsman and right-arm fast bowler from Kolkata Knight Riders. He has picked up 10 wickets in this tournament so far and will be among the crucial picks for this game as well.

how will the pitch report

The pitch at the Brabourne Stadium is generally helpful to the batsmen and has been seen so far this season as well. A total of five matches have been played here and all have scored big. The minimum score of the first innings this season has been 177. This pitch helps the fast bowlers in the beginning, but later on, the batting becomes very easy and the batsmen can easily hit big shots. Thats why its easy to score runs here. The chances of getting a big score in this match too are very high.

The temperature during the match will be between 31 to 27 degrees. There is a 10 percent chance of rain. The sky will be completely clear, but during the first innings, the players can be troubled by the heat. Later the temperature will be lower and the players will get relief. The humidity is expected to be around 71 per cent. If the humidity is high, the effect of dew will be very high. To avoid this, Aspa 80 can be used, through which the effect of dew is reduced.