Rohit Sharma has etched his name as the most successful captain in the IPL with five trophies, the most by anyone in the tournament.

MI is a part of the Indian Premier League (IPL) from Mumbai and they play their home matches at at Wankhede Stadium. It is the only team to win the IPL title five times (2013, 2015, 2017, 2019 and 2020). Mumbai Indians has been the best team among all franchises in the history of IPL as they try to dominate their opponents every year with their match winning performances. Mumbai Indians spent a gigantic amount of Rs 15.25 crore to get back their former key player Ishan Kishan, who is also the biggest bid for this season till now. They also managed to get SA U19 star batter Dewald Brevis for a bargain.

Mumbai Indians (MI) squads ipl 2022. In Ipl 2022 mi bought some big players like Jofra Archer, Tim David and Fabian Allen. This IPL Mumbai is planning to clinch the IPL trophy for 6th time. Here is the list of Mumbai Indians Gunners who can take Mumbai Indians to the road of IPL glory.

Which players retained by Mumbai Indians in IPL 2022? Rohit Sharma was an easy pick as the team’s most successful captain, with five IPL victories to his credit, as well as their standout batter, with 4,441 runs to his credit. MI also chose Kieron Pollard, their key all-rounder, who has helped the club win countless matches under challenging circumstances and has hit 214 sixes for the organization. Suryakumar Yadav had a difficult season last year, scoring 317 runs in 14 games. Mumbai Indians retained Rohit Sharma, Jasprit Bumrah, and Kieron Pollard — Ishan Kishan chances of being retained for his wicketkeeper/aggressive opening batting position are good.
It is almost impossible for Mumbai Indians to look beyond Rohit Sharma and Jasprit Bumrah as they are the main pillars of the team in their perspective roles.

What are the big players signed by Mumbai Indians in IPL 2022? For the very first time, the side splashed over 10 crore for a player at auction as they signed Kishan for a staggering INR 15.25 crore. Besides Kishan, however, the side didn’t go hard after any big name. In fact, they had a purse of INR 27.85 crore after Day 1, second-biggest for any franchise. Singapore dasher Tim David was high on MI’s wish list as they splashed a whopping INR 8.25 crore to get him on board.

Mumbai Indians has been put into group-A by the BCCI. The teams have been assigned in two virtual groups. This is based on the number of IPL Championships won followed by the number of Final matches played by the respective teams.

What is the motto of Mumbai Indians (MI)? The motto of the team is "Duniya Hila Denge Hum...", which translates to We will rock the world.
What logo of mumbai indians represents? The team logo is the Sudarshan Chakra (or Razor) as initially the name of the team was supposed to be "Mumbai Razors" before Sachin Tendulkar suggested to keep it Mumbai Indians.
What is jersey color of Mumbai Indians team? The team's primary colour is blue with golden stripes on either sides of the jersey.

What is the total value of Mumbai Indians? Mumbai Indians retained the top spot in the franchise brand rankings for the fifth consecutive year with a value of ₹761 crore, down 5.9 per cent from the previous year. 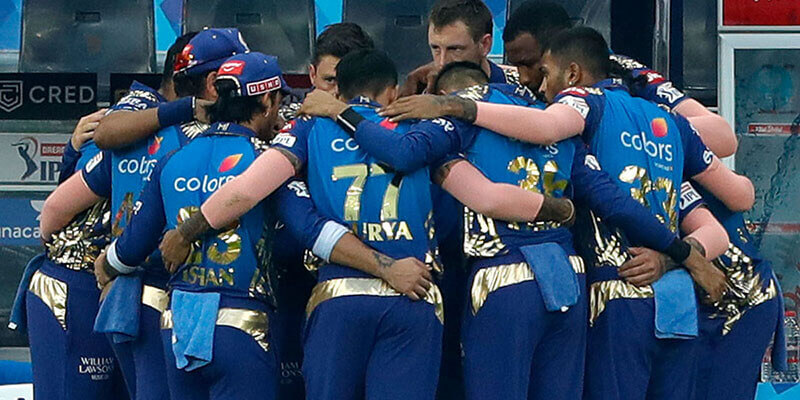