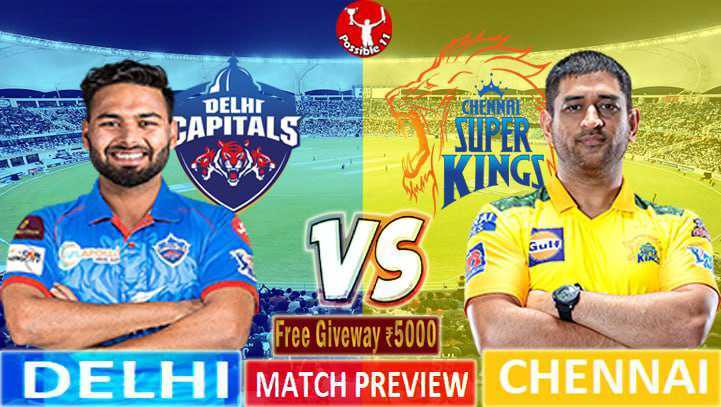 Rishabh Pant and his mighty team beat Mumbai Indians in their previous clash. Chasing a low score of 130, they got past the line in 19.1 overs with six wickets in hand. They look in trouble at 77/5 at one point in the run-chase. However, important knocks from Pant, Shreyas Iyer, and Ravichandran Ashwin made sure that Delhi capitals go home eventually.

Meanwhile CSK, lost a match with Rajasthan Royals. Despite setting a humongous target of 190, the Chennai bowlers could not defend the runs as Rajasthan easily achieved the target in just 17.3 overs to win the game with seven wickets in hand. Yashasvi Jaiswal hit a quick-fire 21-ball 50 as Shivam Dube, unbeaten on 62 finished the game for the Royals. Earlier, opener Ruturaj Gaikwad continued his brilliant form as he got to his maiden IPL hundred, he got to a hundred with last ball six making a terrific personal best of 60-ball 101.

As the two sides collide, this will also be a top-of-the-table clash. With both DC and CSK eyeing that top-two finish, this will be an important game to take the edge as the season gets closer to the end.

DC vs CSK Dream11 Prediction, Fantasy Cricket Tips, Dream11 Team, Playing XI, Pitch Report, Injury Update of Vivo IPL 2021 match between Delhi Capitals and Chennai Super Kings. They will be against each other for the second time in this season of the Vivo IPL 2021

The match begins at 7.30 PM IST and will take place at the Dubai International Cricket Stadium, on Monday, October 4. The match will be telecasted on the Star Sports network and will be live-streamed on Disney+ Hotstar in India. while the live score can be tracked on possible11 app.

The temperature is expected to hover around 24°C on the matchday with 54% humidity and 13 km/hr wind speed. There are no chances of fog or precipitation during the game.

Dhawan is not in his best form in the second half of IPL, but he is the leading run-scorer of his team this season. Shikhar is very good Captaincy choice in Delhi Capitals vs Chennai Super Kings Dream11 team.

Shreyas Iyer has been the match-winner for DC in the previous matches. He scored 33 runs in the last game and played major role in for DC.

Pant has been so consistentance for his team this season. He scored 26 runs in the last game he is must pick player for your dream11 team.

Avesh Khan has bowled brilliantly in the last two matches picking up 3 wickets in each game.

Nortje has been brilliant at limiting the flow of runs. He picked up a wicket for just 19 runs and a maiden over. he bowled some of the fastest bowls this season

Also Read: This senior cricketer had complained the BCCI about Virat Kohli

Ruturaj has been in phenomenal form as he scored a 101* from just 60 balls in the last match. He is also a must have pick in DC vs CSK Dream11 Team prediction. hes a captain choice for your dream11 team today

Faf has been batting well but needs to play a big inning. He scored 25 runs from 19 balls in the last match.

Moeen Ali has appeared to be struggling in the recent matches as he scored 27 runs and was expensive in the last game and went wicketless. Moeen Ali is very good Captain choice in DC vs CSK Dream11 Team.

Jadeja has been outstanding form in his batting. He scored 32* runs from 15 balls but went wicketless in the last match.

Shardul has been one of the best bowlers for CSK in the second leg of IPL. He picked up two wickets in the last match.

Axar is a left-arm orthodox bowler and can also play some big shots. He bowled brilliantly, picking up three wickets for 21 runs in the last match. hes a good pick for grand league.

He is aggressive right-hander batsman. Prithvi Shaw scored 335 runs so far in IPL 2021.