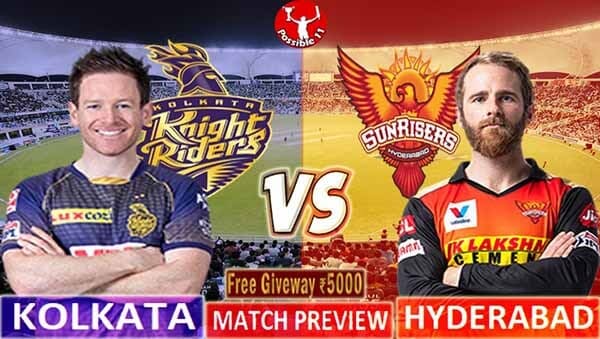 IPL 2021 Kolkata v Hyderabad Match Preview: Sunrisers team has been able to register only one win in four matches after the resumption of IPL in UAE.

The last-placed Sunrisers Hyderabad, who have been out of the race for the play-offs, will on Sunday aim to sabotage the Kolkata Knight Riders knockout chances of making it to the IPL 2021. Sunrisers are on the last spot with nine losses from 11 matches while KKR are still keeping their hopes alive with 10 points from 12 matches.

Sunrisers team has been able to register only one win in four matches after the resumption of IPL in UAE. Sunrisers registered an easy win against Rajasthan Royals after five consecutive losses but suffered a six-wicket defeat in the last match in Sharjah to help Chennai Super Kings qualify for the play-offs.

Sunrisers did not give their captain David Warner a chance in the playing XI, which won the IPL title (in 2016), but despite this change, Kane Williamsons team could not register a win.

Batting has been Sunrisers weak link

Batting is Sunrisers weak side. Especially in the absence of Jonny Bairstow. England opener Jason Roy made a blistering 60 on his debut and Williamson also scored 51 as the team defeated the Royals but both failed in the previous match against the Super Kings.

Wriddhiman Saha made 44 off 46 balls but could manage only 37 runs in the last five overs against Sunrisers Super Kings. If Sunrisers want to end the season on a positive note, then its Indian players like Priyam Garg, Abhishek Sharma, and Abdul Samad will have to perform well.

In the bowling, Jason Holder has impressed but senior Indian bowlers Bhuvneshwar Kumar and Siddharth Kaul have disappointed. Leg spinner Rashid Khan is the teams biggest weapon against any opponent but in most matches, he is not getting enough runs to defend.

KKR lost 2 out of 3 matches in UAE

Two-time champions KKR have done well in the UAE stage. The team has won three matches while losing two. Venkatesh Iyer has done well with the bat in the second leg for KKR while Rahul Tripathi has scored the most runs for the team this season.

Nitish Rana has also got the advantage of feeding up the order but Shubman Gill has failed to take advantage of a good start. Varun Chakravarthy and Sunil Narine are doing well in bowling. However, the squad had to be changed due to injuries to Andre Russell and Lockie Ferguson.

Captain Eoin Morgan continues to fail with the bat and the team will be hoping for a better performance from him. Tim Southee and Shivam Mavi are handling the new ball for KKR. The famous Krishna lacked consistency and was dropped from the playing XI after spending 22 runs in the 19th over against the Super Kings.

Whose upper hand in Kolkata-Hyderabad

Kolkata and Hyderabad will face each other for the second time in IPL-14. When the two met in the first leg played in India, KKR beat SRH by 10 runs. At the same time, if we talk about the total 20 matches played in the tournament between the two teams, Kolkata has the upper hand. KKR won 13 matches while SRH won 7 matches. On the other hand, in the last matches as well, KKR has dominated. Kolkata won four matches and Hyderabad managed to taste victory once.

Kolkata and Hyderabad had to face defeat in their previous match. While KKR beat Punjab Kings by 5 wickets, Hyderabad were defeated by Chennai Super Kings by 6 wickets. Kolkata and Hyderabad can make one change each in their playing XI. Kolkata can keep Shakib Al Hasan in place of Tim Seifert in the team. Seifert was dismissed in front of Punjab after scoring only 2 runs. On the other hand, Hyderabad may include Manish Pandey in the playing XI in place of Priyam Garg. Garg was able to score only 7 runs in 10 balls in front of Chennai.

KKR vs SRH: if you lose money in dream 11 then join our Telegram channel where we provide a winning team of every match