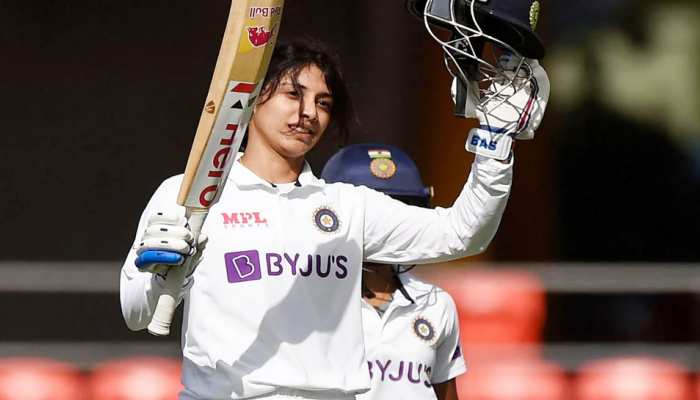 Indian women’s cricket team opener batter Smriti Mandhana became the first Indian woman to score a century in a day/night Test on Friday when she played a 127-run outstanding knock against Australia in the one-off day/night Test. This is also the first century by an Indian woman on an Australian pitch.

Indias Smriti Mandhana reached her maiden Test century in the pink-ball Test against Australia in the Gold Coast on Friday.Mandhanas first triple-digit score in Test cricket came in 170 deliveries and has been the backbone of the Indian innings in the one-off pink ball game in Carrara.This is the first century by an Indian woman on Australian soil and only the second Test hundred by an Indian against the Aussies.

Mandhana performed 127 off 216 balls with the help of 22 boundaries and an outstanding six at Oval, and added an Indian record of 102 runs in Australia for the second wicket with Punam Raut (36), continuing the good work after putting on 93 with Shafali Verma on an opening day.

Mandhana, who played some lovely off-side field repeatedly with some gorgeous shots to reach 80 off 144 balls with 15 boundaries and a six, added 93 for the opening stand with Shafali Verma (31 off 64 balls), who played the second fiddle during their partnership.

Most of the second session’s play was washed out but Mandhana added another 16 runs to surpass her previous best of 78.