The Rajasthan Royals, who competed in the inaugural season of the Indian Premier League in 2008, were led by Australian leg-spinner Shane Warne and became the first team to win the tournament. However, they struggled in subsequent seasons due to the absence of key players. This article will provide an overview of the Rajasthan Royals team for 2023, including the names of new players, the team captain and the list of players retained by the team.

Rajasthan Royals 2023 All You Need To Know About

The Rajasthan Royals (RR) is a franchise cricket team that plays in the Indian Premier League (IPL). The team is based in Jaipur, Rajasthan and was one of the original 8 teams that participated in the inaugural tournament of the IPL in 2008. RR was the first team to win the IPL title in 2008 under the leadership of Australian leg-spinner Shane Warne. However, the team struggled in the following seasons due to the absence of key players. The team is known for their aggressive style of play and they have a mix of Indian and overseas players in their squad. In the 2023 edition of the IPL, the Rajasthan Royals will be captained by Sanju Samson and will be look to go all the way and win the tournament again.

Which players retained by RR in IPL 2023? The Rajasthan Royals team retained many of their key players for the upcoming season, despite letting go of some notable names. They will have a budget of 13.20 Cr for the upcoming player auction and will be looking to add depth to their squad. The team had a successful season in 2022, finishing second in the league standings with nine wins. They narrowly missed out on winning the championship, losing to first-time winners Gujarat Titans in the final.

Following are the details of the RR Retained Players IPL 2023:

what are the new players bought by RR in ipl 2023? RR bought Prasidh Krishna, Trent Boult, Ravichandran Ashwin and Yuzvendra Chahal as new signings for IPL 2023. They are one of the most experienced players in charge of the pace and spin department for Rajasthan Royals.

The Indian Premier League 2023 schedule has not been officially announced yet by the BCCI, but according to sources, the tournament is expected to take place between April 1st and June 4th, 2023. The 16th season of IPL will feature a total of 74 matches, including 70 league matches (with each team playing 14 matches), 2 qualifier games, 1 eliminator match, and the final. Typically, teams that win 8 matches advance to the semi-final and elimination rounds of the tournament.

What is the home ground of Rajasthan Royals team? Rajasthan Royals, one of the 8 teams that participated in the inaugural tournament of the Indian Premier League in 2008, has Sawai Mansingh Stadium in Jaipur as their home ground. The stadium has a capacity of over 30,000 spectators and has hosted several high-profile matches, including IPL matches for the Rajasthan Royals team. The team won their first and only IPL title in the year 2008 under the leadership of the legendary Australian leg spinner Shane Warne.

What is the Slogan of Rajasthan Royals (RR)? The RR team slogan is used to be Halla Bol In the first IPL season, Their current anthem, released in 2018, is Phir Halla Bol.

What logo of Rajasthan Royals represents? The updated logo of the Rajasthan Royals, featuring the letters "RR" in a regal font and two lion buglers, symbolizes the team's emphasis on royalty and power. The blue and gold color scheme, also present in the logo, is reflected in the team's jersey.

What is jersey color of Rajasthan Royals team? The Rajasthan Royals' Pink jersey is a symbol of support for cancer awareness. The unique design features a blend of pink, burgundy, and teal colors, each representing a specific type of cancer: pink for breast cancer, burgundy for oral cancer, and teal for cervical cancer.

What is the total value of Rajasthan Royals? The estimated worth of the Rajasthan Royals team is $250 million, or around INR 19.2 billion, following the inclusion of RedBird Capital Partners as investors. 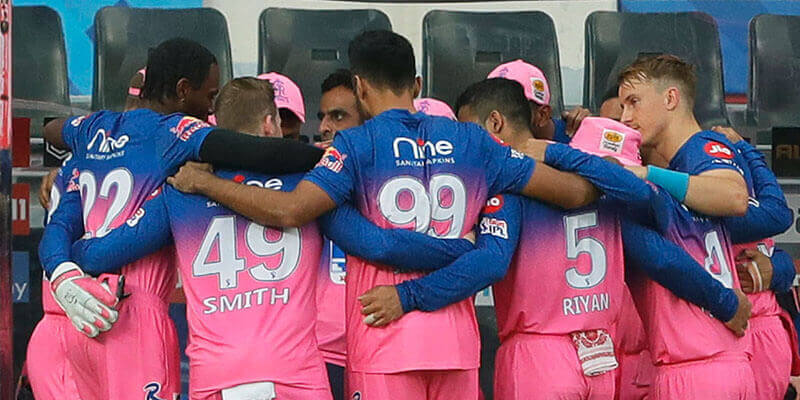