IPL 2022 CSK Squad: The four-time IPL trophy winners Chennai Super Kings is one of the franchises who need to reconstruct their core team inorder to stay consistent in the upcoming IPL seasons.

On considering Chennai Super Kings, the team with 4 IPL trophies will always love to play with their core team that will always remain unchanged in almost every situation. CSK is well known for backing up their players even in their tough situations.

One of the reasons why Mahendra Singh Dhoni-led Chennai Super Kings (CSK) are one of the most successful teams in the Indian Premier League (IPL) over the years is because they relied on their core players. The retention of a core group over the years had served them wonderfully well.

Chennai Super Kings had an available salary purse of Rs. 48 crores during IPL 2021 auction. Ahead of the auction, the IPL 2021 champions spent Rs. 42 crores out of their 90 crores to retain 4 players in their squad.

Which players retained by CSK in IPL 2022? The CSK had retained four players; Ravindra Jadeja, MS Dhoni, Moeen Ali and Ruturaj Gaikwad ahead of the 2022 edition. The franchise further brought back Deepak Chahar, Ambati Rayudu, Robin Uthappa, and Dwayne Bravo, who had played major roles in their title-winning season in 2021. A shrewd MS Dhoni as a leader and a franchise that backs experience over anything else, CSK once again stuck to their usual auction mantra but pulled a surprise with the purchase of Under-19 star Rajvardhan Hangargekar, an excellent player who could make their starting XI.

Following are the details of the CSK Retained Players IPL 2022:

What are the big players signed by CSK in IPL 2022? Chennai Super Kings once again focussed on retaining their core base of players as much as possible as they bought back Deepak Chahar(14 crore), Dwayne Bravo(INR 4.40 crores), Ambati Rayudu(INR 6.75 crores) and Robin Uthappa(INR 2 crores) in the IPL Mega Auction 2022.

what are the new players bought by CSK in ipl 2022?While CSK couldn’t bring back former South Africa batter Faf du Plessis, the franchise sees a number of new faces ahead of the new edition. New Zealand opener Devon Conway was signed by the CSK alongside the likes of all-rounders Shivam Dube and Dwaine Pretorius.

CSK has been put into group-B by the BCCI. The teams have been assigned in two virtual groups. This is based on the number of IPL Championships won followed by the number of Final matches played by the respective teams.

What is the home ground of Chennai Super Kings team? The home ground of the Super Kings is the historic M. A. Chidambaram Stadium (commonly called "The Chepauk") located in Chennai. The stadium is named after former BCCI President M. A. Chidambaram. It is the oldest stadium in India which is in continuous use. The stadium is owned by the Tamil Nadu Cricket Association and has a seating capacity of 50,000 as of May 2013. In 2010, the stadium underwent a major renovation for hosting some of the matches of the 2011 ICC Cricket World Cup. The seating capacity was increased from 36,000 to 50,000 and three new stands were established during this renovation. (Source:- Wikipedia)

What is the motto of Chennai Super Kings (CSK)? The motto of the team is Yellove and Whistlepodu, It is also a folk dance and music genre employed in Tamil cinema. The recordings of some of the Super Kings players whistling were used in the music video.
What logo of Chennai Super Kings represents? The team logo features the head of a roaring lion in orange and the team name rendered in blue. The crown above the team name is the same as that used in the logo of the brand Coromandel King. The details of the logo signify various qualities such as youth, vibrancy, solid performance orientation and fiery spirit.
What is jersey color of Chennai Super Kings team? The team's primary colour is yellow with blue and orange stripes on either sides of the jersey they also called as Yellow Army.

What is the total value of Chennai Super Kings? The market valuation of mighty CSK around ₹ 4,200 crores, the company become the India's first sports unicorn. With the news of addition of two new teams during the next IPL season in 2022, the valuation of CSK unlisted shares has further increased. 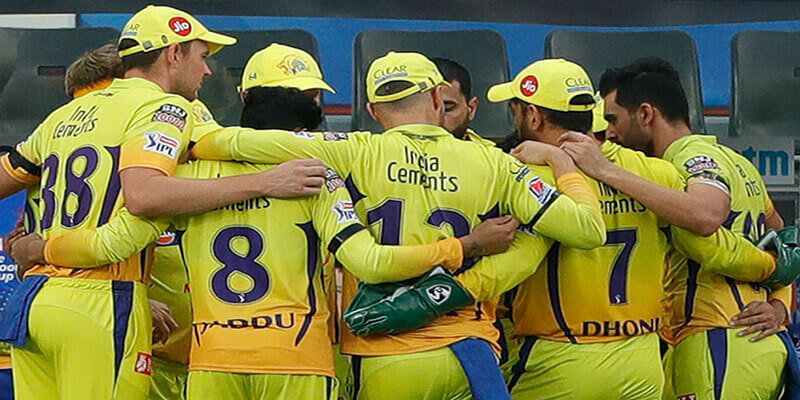