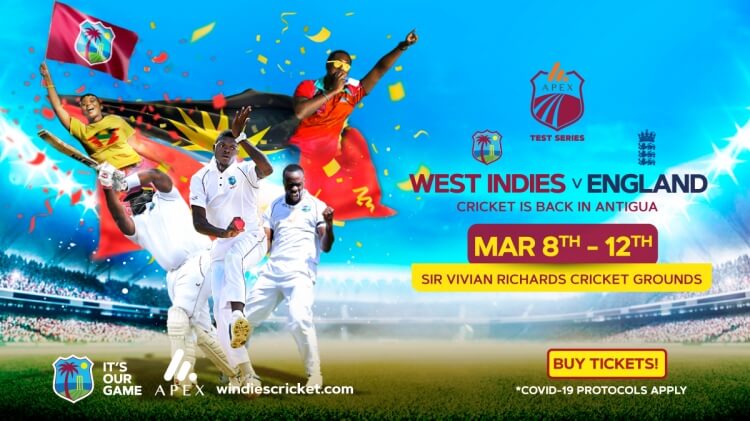 The Test series will be a part of the World Test Championship 2021-23.

West Indies last assignment was the limited-overs tour to India where they failed to win a single game. They haven’t played any red-ball cricket off late and will be hoping for a turnaround in fortunes with the change in format.

Kraigg Brathwaite will continue to lead the Test side. Uncapped pacer Anderson Phillip, opening batter John Campbell, and Shamarh Brooks have been named in the squad. Shannon Gabriel wasn’t available for selection due to an injury.

England, on the other hand, is coming off a 4-0 hammering in the Ashes series Down Under. A lot rests on Joe Roots shoulders as they aim to bounce back in red-ball cricket. He will be hoping to lead the side by example in the upcoming Test series.

England competed against West Indies Cricket Board President XI in a four-day practice match ahead of the first Test. Batting first, their batters contributed heavily to post 466 on the board. The bowlers then stepped up to knock over the opposition on 264.

England declared their second innings at 164 and picked up seven wickets with the ball but failed to finish on the winning side as the match ended in a draw.

Jason Holder is a right-handed batsman and right-arm medium-fast bowler from West Indies. He has smashed 2477 runs and picked up 138 wickets in his 53 matches Test career so far.

Ben Stokes is a left-handed batsman and right-arm medium-fast bowler from England. He has smacked 4867 runs and grabbed 167 wickets in his 76 matches Test career so far.

Chris Woakes is a right-handed batsman and right-arm medium-fast bowler from England. He has marked 1535 runs and hunted 125 wickets in his 42 matches Test career so far.

Joe Root is a right-handed batsman and right-arm off-break bowler from England. He has hammered 9600 runs and took 44 wickets in his 114 matches Test career so far.

England team is looking really strong, they will win this match.

It will be interesting to see how the pitch pans out. Generally, wickets in the Caribbean start out being friendly to the batsman. As the match progresses, bowlers seem to get more purchases from the wickets. Jack Leach and Veerasammy Permaul can play an important role in the second half of the Test match.

The temperature is expected to hover around 24°C on the matchdays with 77% humidity and 18-21 km/hr wind speed. There are no chances of precipitation during the game.