India vs Pakistan Head to Head Records in all Three Format 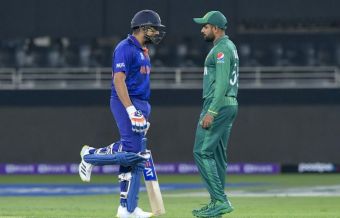 India vs Pakistan (Ind vs Pak) Head to Head Records in all Three Format, If we look at the head to head records between the two teams, then India has the upper hand.

Whenever the teams of India and Pakistan play against each other, the spectators get to see an exciting match. Both the teams have given many memorable moments so far which probably a fan will be able to forget. Talking about the matches between these two teams in the Asia Cup, Team India was heavy on Pakistan here as well, once again both the teams are ready to clash in the T20 World Cup tournament. Before we can understand the rivalry between the two teams, let us look at the statistics of the matches between these two so far, which will make it clear which team has been dominant over whom?

India vs Pakistan Head to Head Records in all Three Format

Ind vs Pak Head to Head: Talking about the overall head to head record between these two teams, Pakistan leads the team in Tests and ODIs, but when it comes to the statistics of a tournament, Indias upper hand is seen. In ODIs, Pakistan leads 73-55 while in Tests India leads 12-9, India leads 8-3 in T20 format.

India vs Pakistan Head to Head

India vs Pakistan Head to head In World Cups

Highest team total in a Test innings: Pakistan scored 699/5 against India in the third Test at Lahore in 1989–90.

Lowest team total in a Test innings: Pakistan bowled out India for 106 in the second Test at Lucknow in 1952–53.

Highest individual score in Tests: Indias opener Virender Sehwag scored 309 against Pakistan in the first Test at Multan in 2004.

Best bowling figures in Tests: Indias Anil Kumble scored 10/74 against Pakistan in the second innings of the second Test at the Feroz Shah Kotla in Delhi in 1999.

India vs Pakistan in ODIs records
Highest team total in ODIs: India scored 356/9 in the second ODI against Pakistan at Vizag in 2004–05.

Lowest team total in ODIs: Pakistan bowled India out for 79 in the second ODI at Sialkot in 1978-79.

Highest individual score in ODIs: Pakistan opener Saeed Anwar scored 194 against India in the sixth ODI of the Independence Cup in Chennai in 1997.

Best bowling figures in ODIs: Aaqib Javed of Pakistan scored 7/37 against India in the final of the Wills Trophy in Sharjah in 1991.

India vs Pakistan in T20Is records

India and Pakistan created history in 2007 by becoming the first two countries to reach the final of the ICC World T20 opening ceremony in South Africa. Both sides had also been involved in a ball-out during a group stage match at the mega event in Durban.

Lowest team total in T20Is: India bowled out Pakistan for 83 runs in the fourth T20I in Dhaka during the 2016 Asia Cup.