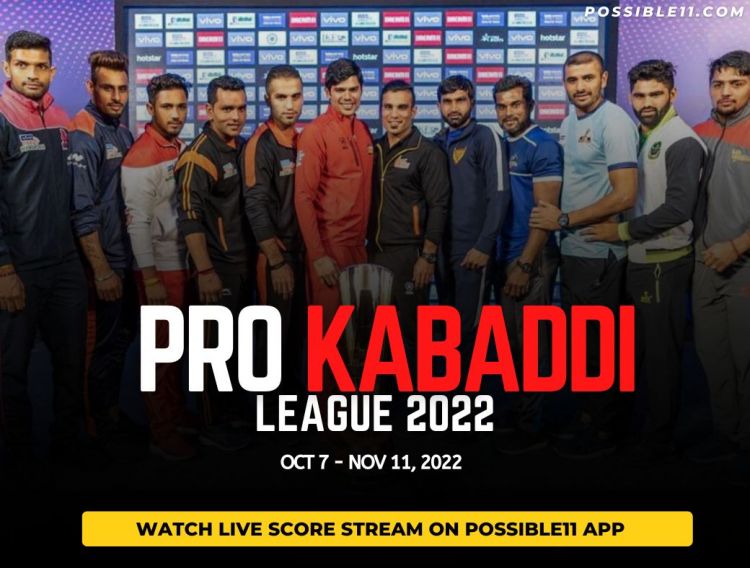 The ninth season of the Pro Kabaddi League (PKL) will begin on October 7, 2022. The first leg of the competition will be held in Bengaluru, the second leg in Pune, and the final leg in Hyderabad. The Covid-19 pandemic forced the organisers to organise the event behind closed doors at a single location last season. This season, however, will be special because it will welcome back kabaddi fans to the stadium. The Pro Kabaddi League is Indias only tournament that has seen its broadcast viewing figures rise in each of the last four seasons.

Pro Kabaddi 2022 all you need to know? According to a BARC India study, it is Indias most successful non-cricket property, with a 61% audience share, followed by the Indian Super League (ISL) at 16%. The edition will begin with defending champions Dabang Delhi taking on season 2 winners U Mumba. The first days second game will be a southern derby between the Bengaluru Bulls and the Telugu Titans, followed by a match between the Jaipur Pink Panthers and the UP Yoddha.

Check out the Complete list of teams with their owners, captains and coaches for PKL 2022 season 9

The Vivo Pro Kabaddi Season 9 is set to take place in October, November, and December of 2022, as expected. The authorities have announced the timetable for the matches that will take place in the coming weeks to kick off the Pro Kabaddi 2022 season.

The authorities have stated that this years PKL matches will be held in Bangalore, Pune, and Hyderabad.The player auction for all teams had already concluded, and the management had already planned the best precautions to ensure that the matches could begin smoothly while also protecting the players health in light of the Covid conditions.

Also Read: Jasprit Bumrah Ruled Out Of T20 World Cup Due To Back Stress Fracture

The Pro Kabaddi League (PKL) 2022 will take place at three different locations. The first round of matches will be held at Bangalores Shree Kanteerva Stadium. Shree Chhatrapati Sports Complex in Pune and Gaachibowli Indoor Stadium in Hyderabad are the other venues.

How to buy stadium tickets for Pro Kabaddi 2022? The PKL 2022 Season 9 ticket sale has begun. Here you will find all the latest news and information on ticket sales for the Pro Kabaddi League 2022 season 9. Ticket sales for the PKL 2022, also known as the Pro Kabaddi League season 9, have begun on BookMyShow. Those interested in purchasing tickets can do so directly through the online portal. Links to the tickets are also updated here, and you can find the direct booking link to buy the tickets on each teams booking post.

Offline tickets can be purchased in addition to online tickets. The sale of offline tickets will begin at the stadium counters. I recommend that you only purchase your tickets online. You can watch it online at BookMyShow and in person at the stadium shortly before the game begins. Visit our website to book all match tickets; we will provide you with a direct link to purchase the tickets.

What are top 5 most expensive players in Pro kabaddi 2022 season 9? The auction resulted in the largest recruitment in PKL history. The Tamil Thalaivas paid Rs 2.26 crore for Hi-flyer Pawan Sehrawat, setting a new record. As team budgets were increased from Rs 4 crore to Rs 4.4 crore, teams had more leeway to break the bank when the players were on the block.

Where to watch Pro Kabaddi 2022 free on mobile? All Pro Kabaddi 2022 matches will be streamed live on Disney+Hotstar. Fans can also watch the action live on the JioTV app. Fans can follow Possible11 and the official website of the Pro Kabaddi League for live scores, updates, and news.

With each season, the anticipation for the Pro Kabaddi League grows, as does the excitement and quality of the matches. With Dabang Delhi KC defending their title and eleven teams attempting to stop them, its shaping up to be another exciting three months of PKL action.

Pro Kabaddi has been instrumental in revolutionising the sport in the country since its inception in 2014. Six champions have emerged from the leagues eight seasons, with Patna Pirates being the only team to win the title on multiple occasions. The other five teams to be crowned PKL champions are Jaipur Pink Panthers, U Mumba, Bengaluru Bulls, Bengal Warriors, and Dabang Delhi K.C. Here is a list of all the Pro Kabaddi champions.