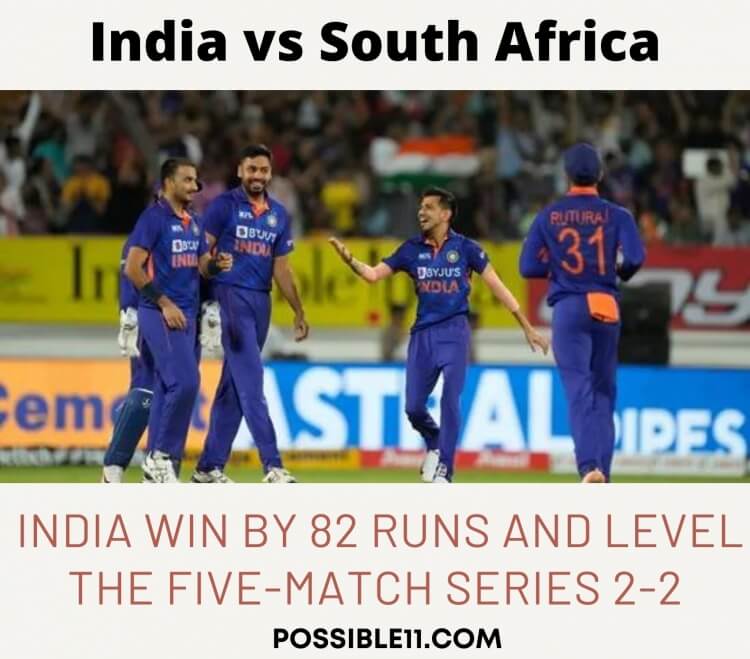 India vs South Africa 4th T20 full Highlight: Dinesh Karthik hit 55 off 27 deliveries to record his maiden T20I fifty as India reached 169/6 in 20 overs in the fourth T20I in Rajkot. India gathered just 56 runs in the first 10 overs before the Hardik-Karthik stand boosted the scoring rate. While Hardik perished after hitting 46, Karthik went on to score his maiden T20I fifty. He gathered 55 off just 27 deliveries, hitting nine fours and two sixes en route to the fifty mark. Earlier, SA captain Temba Bavuma won the toss and elected to bowl against unchanged India at the SCA Stadium. South Africa made three changes, replacing Kagiso Rabada, Wayne Parnell and Reeza Hendricks with Marco Jansen, a fit-again Quinton de Kock, and Lungi Ngidi. India, on the other hand, opted for an unchanged side. After outwitting India in the first two games, the Proteas were at the receiving end in the third match and eventually faced a defeat. Led by Rishabh Pant, the hosts made a stellar comeback in the series after being down 2-0 and clinched the 3rd T20I game at Vizag by 48 runs.

India level the series here at Rajkot and we are going into Bengaluru now for an all-important decider. Has to say, India have momentum on their side now, it has been another convincing victory for them.

Clinical win for #TeamIndia in Rajkot! ? ?

A brilliant performance from the hosts as they register a comprehensive win in the fourth T20I! #INDvSA pic.twitter.com/eZFSajuLvU

I am feeling really happy. It is my dads birthday and I want to dedicate this performance to him. The plan was to bowl up and attack the stumps, it was a two-paced wicket with the ball bouncing and keeping low, so use the odd bouncer and bowl good lengths. I brought the fine leg in and pushed mid-wicket back, forced RvD to go after the length ball, Rishabh then told me to bowl the leg-cutter after I had hit Jansen with a bouncer and for Maharaj also I bowled a slower ball on the hard length. We are playing well as a team, fielding well most importantly and bowling well, we back each other and will enjoy the last game. Yes, the winner will take the series and it is going to be a good match, we will give our 100 percent. Avesh Khan (4-0-18-4)

Obviously it didnt go according to plan in the last few overs, but we felt the pitch got a bit better at the end. It is the lack of adaptability on our side. We need to be a bit more proactive. We stifled ourselves in the powerplay. We didnt get any partnerships and just exploded. Their bowlers bowled really well too. DK played really well at the end but we need to have better plans and adapt better. India is a tough place for spinners to bowl with small grounds. There will be a lot of buzz at the ground in Bangalore. Expect it to be a cracker. South Africas Keshav Maharaj