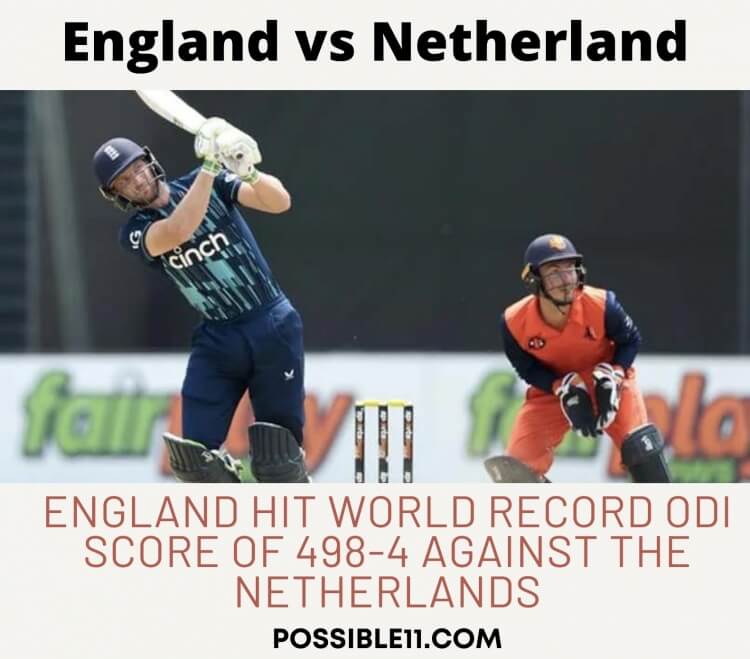 Netherlands vs England, 1st ODI Live Score Updates: England on Monday smashed the world record to register the highest-ever ODI total of 498/4 during the first game against the Netherlands in Amstelveen. England had previously held the record, having smashed 481 for six against Australia. The Three Lions now have the top-three highest scores in One-Day Internationals. Jos Buttler starred with a brilliant 162 off just 70 balls, while Dawid Malan and Phil Salt also scored their maiden ODI tons. Liam Livingstone then added some fireworks to Englands innings, smashing the joint second-fastest fifty in ODI, off just 17 balls. Earlier, Netherlands skipper Pieter Seelaar won the toss and opted to bowl first against England. It has been almost a year since the Three Lions last played an ODI and it will be interesting to see their approach against Pieter Seelaars side. For the Netherlands, hopes of qualification to the World Cup are all but over. Both sides have never met before in official internationals outside of ICC tournaments. It is important to note that the Netherlands defeated England twice in the T20 World Cup.

Its a world record total! England has smashed their own highest ODI total of all-time - and, fittingly, Buttler brings it up with a six!

It comes down to two balls to get to 500 - 12 needed... no! Livingstone smashes it legside but its one bounce for four. The last ball goes all the way. Its 498 for England, they fall just short of 500, but what an innings that was!

"Just stand back and marvel at the ball-striking power and skill of Jos Buttler and Liam Livingstone," says Mark Butcher, on commentary!That was special - a new world record - again! - for this England side!

OUTSTANDING! UNREAL! Just lost for words at the moment! What hitting! Crazy stuff from England! They have broken their own record of the highest ODI score in a game. Total carnage. They will be disappointed they did not cross the 500-run mark which seemed possible at one stage but they have missed that mark by just. Just brilliant!