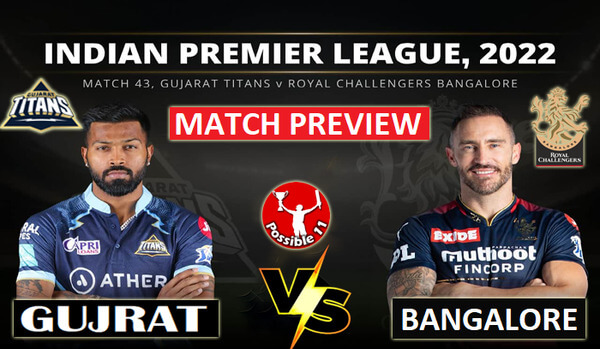 While Bangalore (BLR) is looking to make a comeback after the loss in the last two matches, Gujarat (GT) will try their best to retain their place in the top-1. In this match, there will be a tough competition between the two. So lets have a look before this high voltage match on every single information related to it 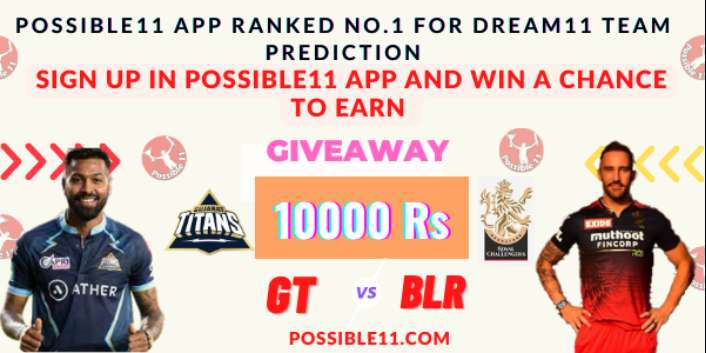 Will have an eye on Virat Kohli form

There is no dearth of depth in BLR batting but they have not been able to walk as a team. Kohli is in poor form while Australias Glenn Maxwell has also been able to score only 124 runs in six matches so far. Only Faf du Plessis, Dinesh Karthik, and Shahbaz Ahmed have been able to score runs but on them. The pressure is increasing.

Talking about the Hardik Pandya-led team Gujarat Titans (BLR), Gujarat is showing a very good performance in IPL 2022. Gujarat has played eight league matches, out of which they have lost only one match. Currently, Gujarat Titans (GT) is on top with seven wins, while Bangalore is in the top-5. In this match, if Bangalore will fight to come to top-3, then Gujarat will also try their best to stay in the top-1. In such a situation, there will be a tough competition between these two in the RCB vs GT match.

The Titans, who have won seven matches out of eight, have won five matches in a row and are looking to have the upper hand. Winning this match will almost ensure his place in the playoffs. Chasing a target of 196 runs for victory in the previous match against Sunrisers Hyderabad, his condition was bad but Rashid Khan, known for his leg-spin, gave the team a miraculous victory with the help of the bat. Rahul Tewatia and Rashid made the impossible possible by hitting four sixes in the last over.

Talking about the pitch of the match between Gujarat Titans and Royal Challengers Bangalore (GT vs RCB) at the Brabourne Stadium in Mumbai, it is generally known for batting. It will be easier for the batsmen to play stroke at the Brabourne Stadium. It has been seen in the matches played here that the players do not face much problem in batting, big scores have also been seen on this pitch in this season.

That is, one thing is clear from this that a long score can be made on the field and it can also be achieved easily. The wicket will be friendly to the batsmen and will also give a lot of help to the outfield batters. Also, spin bowlers can also get help from the pitch. Batting in the second innings here can be a good decision for the team. But, the team with the first innings can also defend its score. By the way, the team winning the toss would like to decide to bowl first.