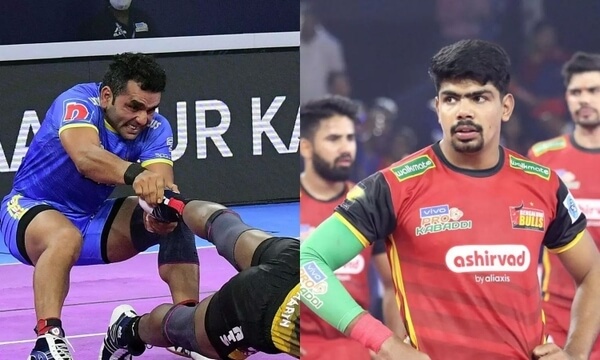 Tamil Thalaivas will lock horns with the Bengaluru Bulls in Match 83 of Pro Kabaddi 2022 on Sunday, January 30. The Sheraton Grand Whitefield Hotel and Convention Center in Bengaluru will host this contest.

Tamil Thalaivas find themselves 10th in the PKL points table with 34 points from 13 matches. They have three wins and four losses this season, while their remaining six games ended in draws.

Meanwhile, the Bulls are currently placed second in the standings with 46 points from 15 games. They have eight wins and half a dozen losses so far in the eighth edition of the Pro Kabaddi League. Their remaining game finished in a draw.

The Bengaluru Bulls lost their previous encounter against U Mumba by 11 points. Tamil Thalaivas, on the other hand, succumbed to a massive defeat against the Patna Pirates.

Both sides head into this encounter on the back of a loss in their previous PKL encounter and will look to get back to winning ways when they take on each other in the second game of the day.

Manjeet: Manjeet had a sensational last season and has now emerged as the lead raider for the Tamil Thalaivas outfit. The youngster has had a bright season thus far with 100 raid points to his name. He doesnt shy away from putting in a tackle either and has 4 tackle points to his name. He had a poor last game and would be eager to bounce back.

Ajinkya Pawar: Ajinkya Pawar had a slow start to the season but has really picked it up in recent games. He scored 13 raid points and a tackle point in the game previous to the last, and added another 5 raid points in the last game. Hed be eager to put on a solid show.

Sagar: Sagar is a solid defender and came into the limelight in the last season. The right-corner defender has been aggressive in putting up tackles and has taken his tally to 49 tackle points, which sees him at the top of the list of top-scoring defenders, thanks to his 7 points in the last game. He has been in terrific form and would hope he can continue the run.

Pawan Kumar Sherawat: Pawan Kumar Sherawat is among the top raiders in the competition and has the ability to win games by himself. He was the top raider last season and his extravagant recent performances have ensured he reclaims the top spot this season as well. The Bengaluru man has taken his tally to 200 raid points, including 14 in the last game. He will look to produce another special effort tonight.

Saurabh Nandal: Saurabh has emerged as the leader of the Bengaluru defense and has played with panache. The right-corner defender has brought out his best this season and his tally for the season reads 47 tackle points and is the top-scoring defender for his team and 3rd overall. He will be a big threat for the pretty much one-man-dependent Bengaluru Bulls raiding unit.

Aman: Aman has been another vital cog in Bengalurus defense. The youngster has put in some fine tackles and has even assisted his seniors in the side to ensure Bengaluru forms a formidable defending side. The left-corner defender has 30 tackle points in 14 games and averaging over 2 points per game.