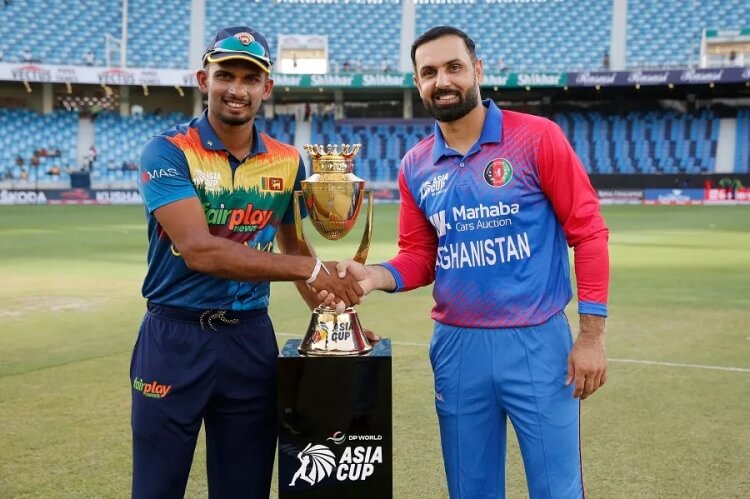 The Super-4 matches of Asia Cup 2022 are going to start from 3rd September. At the same time, in the first match of Super-4, there will be a clash between Sri Lanka and Afghanistan (SL vs AFG). This match will be played at Sharjah Cricket Stadium from 7:30 pm. Let us tell you that Sri Lanka defeated Bangladesh by 2 wickets in their second match of the Asia Cup. Lets find out which players can be selected and made a strong Dream11 (SL vs AFG Dream11 Prediction) for the match between Sri Lanka and Afghanistan.

Mujeeb ur Rahman and Rashid Khan are bowling well for Afghanistan team, and Najibullah Zadran and Hazratullah Zazai have performed well in both matches. Chamika Karunaratne, Kusal Mendis, and Wanindu Hasarangas performance in the last match for the Sri Lanka team was excellent, in this match, the team is expecting a good start from its openers. While Sri Lanka will take the field in this match with the intention of avenging their previous defeat, Afghanistan team would like to maintain their winning streak in the tournament.

This is the first match of the SUPER 4 of Asia cup 2022 after Sri Lanka pulled off a thriller against Bangladesh.

Sri Lanka (SL) will have to show strength in bowling

First of all, if we talk about Sri Lanka, then when the team faced Afghanistan for the first time in the Asia Cup 2022, then the teams batting looked very weak. The team had scored 105 runs against the Afghan team with poor batting. However, after seeing the teams batting against Bangladesh last Thursday, it would not be wrong to say that the team improved its batting and achieved the mountainous target of 184 runs in a spectacular manner.

But now the biggest problem for the team in the next match is bowling. Because in the last two matches, it has been seen that the Sri Lankan team has been flop in bowling. Where the team was able to take only 2 wickets against Afghanistan, the bowlers of the team against Bangladesh took seven wickets as well as looted a lot of runs. In such a situation, now Sri Lankan bowlers will have to show their strength to register a win against Afghanistan.

Afghanistan, on the other hand, have quality spinners and will look to their chances against the Sri Lankan batting lineup. At the same time, Fazlahaq Farooqui bowled a brilliant new ball against Sri Lanka in the last meeting and broke the back of the teams batting order. In such a situation, he will be a big threat to Sri Lankas top order in the next match. Even though the team is top in bowling, apart from the bowlers, the batsmen will also have to show their amazing performance.

In both the matches of the team, the top-order batsmen have handled the front, but the weakness of the team is its lower order at the moment. The lower-order batsmen are not batting in the rhythm they should be doing. Because of this, if the team has to win against Sri Lanka, then its lower-middle-order batsmen will have to show stamina.

Also Read: How to watch All Asia cup matches for free

SL vs AFG Head to Head

Coming to the head-to-head records of SL vs AFG, surprisingly, Afghanistan and Sri Lanka have faced each other only twice in T20Is. The two faced each other once in the ICC T20 World Cup on March 16, 2016. In which Sri Lanka had won. The second time between these two teams was on August 27 in the first match of the Asia Cup 2022, where the Afghanistan team won by 8 wickets.

This pitch is batsmen-friendly. Initially, bowlers get a lot of help on this pitch, winning the toss and batting first will be the right decision on this pitch. Batting in the first innings seems a bit easier, due to the short boundary line, the average first innings score here is 153 runs, but in the last 3 matches, a score of 170 runs has been seen here. The batting in the second innings looked a bit difficult. Thats why 40 percent of the matches have been won while chasing the target.

Talking about the weather during the Afghanistan vs Sri Lanka (SL vs AFG) match, the heat wave continues as usual in Sharjah. Although the matches are starting in the evening, then the players definitely get some relief from the heat. On Saturday, September 3, the minimum temperature is expected to be 29 and the maximum 40 degree Celsius. The wind will blow at a speed of 23 kmph. While the humidity can remain 41 percent