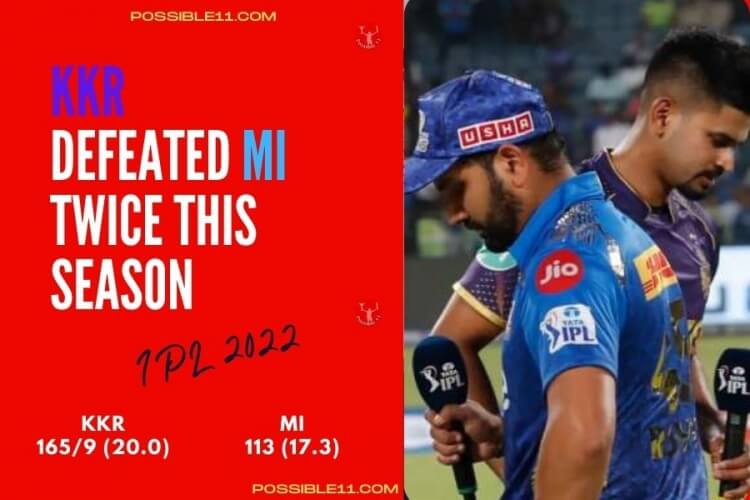 IPL 2022, MI vs KKR Full Match Highlight: Pat Cummins took three wickets in the 15th over after Jasprit Bumrahs five-wicket haul restricted Kolkata Knight Riders to 165/9. While Bumrah bowled a triple wicket maiden to put the breaks on the KKR innings that looked destined to reach 200 before that, Cumminss over put the struggling MI innings in further trouble.

While captain Rohit Sharma fell early, Ishan Kishan scored his first half-century in eight innings. But I have struggled to find any partnerships and have now pinned my hopes on Kieron Pollard. Earlier, Jasprit Bumrah gave just 10 runs away and almost bowled two back-to-back maidens in the latter part of the Kolkata Knight Riders and took his first five-wicket haul in arguably one of the greatest spells of bowling in the IPL.

What an excellent bowling performance then from Kolkata! 165 seemed a little under par but they have done brilliantly to defend this and they have kept their hopes alive of qualifying. Right from the first over their bowlers was on the money. They did not let Mumbai score freely in the Powerplay and also got a couple of wickets. After the first 6 too, they continued the squeeze. Whenever Mumbai looked to accelerate, they lost a wicket. It was a combined bowling effort from Kolkata.

It was Jasprit Bumrah who stole the show with the ball and is adjudged Player of the Match for his excellent bowling figures of 5/10 ??#TATAIPL #MIvKKR pic.twitter.com/ylhTsf95sr

Always a good feeling to contribute but the important thing is for the team to win. We had our chance to do that but couldnt get it done. Thats the way it is. I dont keep track of figures or goals, my aim is to stick to the process. Sometimes you bowl well but dont get wickets. Cant get desperate. Just want to contribute in whatever way I can. Well, its about rectifying our mistakes and doing better next season. Man-of-the-Match: MI pacer Jasprit Bumrah (4-1-10-5)

Very pleased because after losing the last game by a big margin, it feels good to come back and win by a big margin. We had a nice start in the powerplay and Venky targeted the bowlers well. I personally felt that it wasnt easy to start for a new batter. When we went in to bowl, the plan was to hit the right areas and not give room. It is really difficult (to tell players about axings). Coach and at times, CEO is also obviously involved in team selections. Each and every player takes it well, and they have put in their best efforts. The win was comprehensive, and when I spoke to the players, they were pumped up to win the game today. Im not satisfied (totally) but want to maintain this.KKR skipper Shreyas Iyer