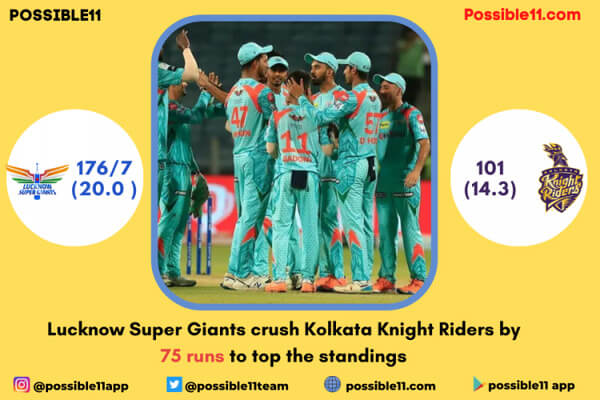 IPL 2022 Highlights, LSG vs KKR Match Today: Lucknow Super Giants notch up a comfortable 75-run win over Kolkata Knight Riders at the MCA Stadium in Pune. Chasing 175 for the win, Kolkata was bundled out for 101 with Avesh Khan and Jason Holder picking up three wickets each. Put in to bat, LSG earlier endured a poor start as Rahul perished for a duck but Quinton de Kock notched up a brisk fifty to keep the scoreboard ticking. Deepak Hooda also contributed with 41 off 27 deliveries. Marcus Stoinis was the top performer at the death after the Australian hit 14-ball 28. Jason Holder also chipped in with 13 from 4 deliveries as Lucknow Super Giants reached 176/7 in 20 overs. For KKR, Andre Russell picked up two crucial wickets of Hooda and Krunal Pandya (25).

Goal was to get him out (Russell). Had a chat with Rahul, and the talk was that if I get hit for six off a hard length ball, Ill still back it. Have seen him get out to that length. Hes one player who can single-handedly win the game. My dad always motivates me, even the coaches here, and Gautam and Rahul. The role is to take wickets and win games. In the last four matches, weve bowled second, so we have an idea of the pitch. Man-of-the-Match: LSG pacer Avesh Khan (3-1-19-3)

Kolkata have been bundled out for 101 runs and Lucknow have sent a warning to all the other sides with this statement win. They have ousted their opponents in the field and it is a huge victory that takes Lucknow onto the top of the points table. This also means that five-times champions, Mumbai are mathematically out of the race for the playoffs.