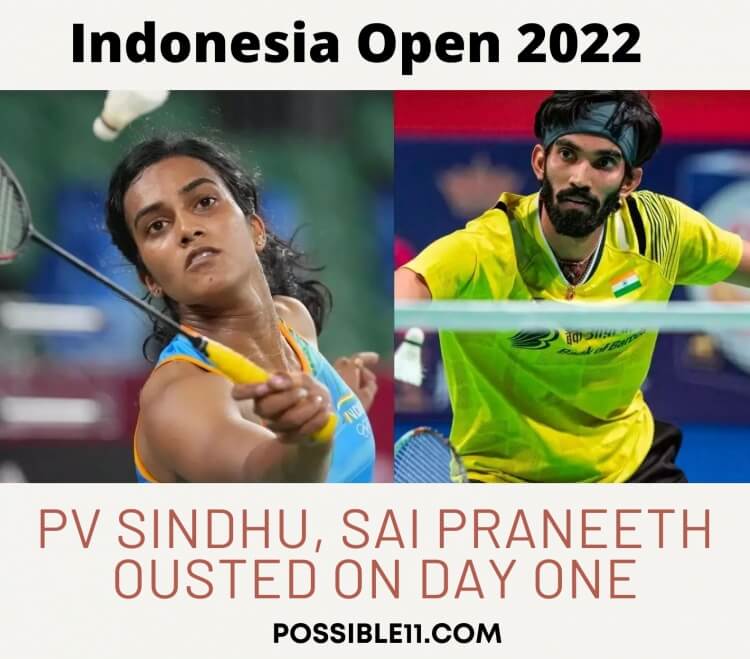 Jakarta (Indonesia): Top Indian shuttlers PV Sindhu and B Sai Praneeth were knocked out in the first round of the Indonesia Open 2022 BWF Super1000 tournament after losing their respective singles matches at the Istora Stadium, here on Tuesday.

Sindhu, the world No 7 in the latest badminton rankings, lost 14-21, 18-21 to China’s He Bing Jiao, who improved her head-to-head record to 10-8 against the former world champion

Double Olympic medalist PV Sindhu was shown the door early at Indonesia Open 2022 after the Indian shuttler lost to Chinas He Bing Jiao in the womens singles first-round match at the Istora in Jakarta on Tuesday, June 14. The 7th seed lost the opener 14-21, 18-21 despite saving a couple of match points in the second game, in just 47 minutes.

Sindhu was handed a tough draw as she had to face World No. 9 He Bing Jiao, who was the top-ranked unseeded shuttler, as early as the opening round. Sindhu came up with some wonderfully-worked winners but she was not able to stitch a series of points amid relentless pressure from the southpaw in the opening round of the prestigious Super 1000 tournament.

World No 9 Jiao started the match better and raced to a 9-2 lead as Sindhu seemed slow off the blocks in the opening exchanges. However, the Indian shuttler, who had defeated Jiao to win the Tokyo Olympics bronze medal last year, came back into the contest and managed to reduce the deficit to 14-12 after prevailing in some closely-fought rallies.

The fightback, though, came a bit too late as Jiao upped the ante and won the first game 21-14. The change of sides in the second game brought Sindhu little joy as Jiao, once again, dominated the early exchanges and took a four-point advantage at the break.

The 26-year-old Sindhu tried hard to get back into the match after the restart and while she did come up with some scorching winners, a bunch of unforced errors costs her as the Chinese shuttler wrapped up the match in 47 minutes.

Meanwhile, Sai Praneeth who was eyeing a comeback after a few injury-ridden months put up a good fight against Denmarks Hans-Kristian Solberg Vittinghus but it was in vain as the former World Championship bronze medallist lost, 21-16, 21-19 to the Dane.

Srikanth crashes OUT in 1st round of Indonesia Open after going down to WR 41 Brice Leverdez 21-23, 10-21.
? Its 1st loss for Srikanth against him in their 6 meetings.
? So what could have been Momota Vs Srikanth in R2, it will be Brice Vs Gemke now! #IndonesiaOpen pic.twitter.com/WnZBOKCjE8

For Sai Praneeth, the comeback will need to wait a little longer because he failed to capitalize on his chances against the more lithe Vittinghus and ended up exiting from the BWF Super 1000 tournament in the first round itself.

Indias luck at the Indonesia Open has always been a little jaded with only former World No. 1s Saina Nehwal and Kidambi Srikanth has won the title here. Saina won the Indonesia Open a record three times - 2009, 2010, and 2012 and finished as a finalist in 2011. Srikanth won in 2017, as well.