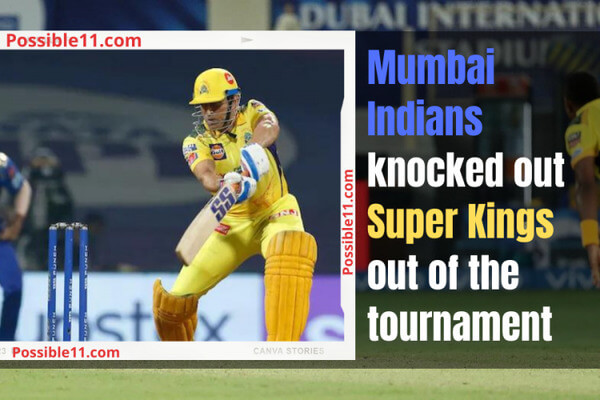 IPL 2022 Highlights, CSK vs MI Match Today: Mumbai Indians captain Rohit Sharma won the toss and elected to bowl against Chennai Super Kings at the Wankhede Stadium in Mumbai. Daniel Sams scythed through Chennais top-order with three wickets in the powerplay, while Jasprit Bumrah and Riley Meredith plucked one each to leave the opposition reeling at 29/5. Chennai kept losing regular wickets to eventually fold for just 97. Sams picked up three wickets while Meredith and Kumar Kartikeya snared two wickets each. For Chennai, skipper Dhoni was the top-scorer with an unbeaten 36.

Daniel Sams was in hot form for MI and took three wickets, Riley Meredith and Kumar Kartikeya bagged a dismissal each. Meanwhile, Jasprit Bumrah and Ramandeep Singh took a wicket each. Chennai are currently ninth in the IPL 2022 Points Table with eight points from 11 games, including four wins and seven defeats. Still in contention for the playoffs, the MS Dhoni-led side will be aiming to grab a win against Mumbai.

In these days of athletic bodies and the philosophy of being ever-ready to steal extra runs, the cheeky walks of Arjuna Ranatunga have been binned to nostalgia. Luckily, Mumbai Indians’ Tilak Varma rewound the clock for us after tapping a ball to long-off.

Just a few hiccups but mostly dominating performance by Mumbai Indians. Something which they are known for. This is also curtains for Chennai Super Kings and their fans. #CSKvsMI

Irrespective of how the wicket is, anything below 130 is difficult to defend, but what I asked the bowlers was to show a lot of character and forget about the result. Both the young fast bowlers bowled really well and I feel a game like this really helps them in believing in themselves that irrespective of the conditions, whenever we start we need to have the same kind of attitude and thats what is needed in the shortest format. We have gone through periods where we never really had that extraordinary bench of fast bowlers. Also fast bowlers they take their time to mature, if you are lucky you get somebody who can feature in all formats in six months time and that is what IPL is doing and it is an opportunity for a lot of them. They bowl a bit courageous now which is very important in a format like this. And some players take their time before executing their plans better. The fast bowlers to have both of them really well is a big positive, and also we will have two more fast bowlers coming in to the next season, also we have few more up the sleeves, just want to give ample time for them to prepare. Its the first few deliveries which is important when you are batting in that kind of pressure, so it was a chance of survival. Once they are past those first few deliveries, they can be themselves. It didnt pay off today but I think they bowled really well. A bit of application was needed from our side, and a few of the batters got out on good deliveries, hopefully they are learning with each and every game. Losing captain MS Dhoni

Looking at how the pitch was playing and to lose wickets upfront, there were tense moments in the middle. It was just about keeping calm and getting the job done. We were a little calm and got the job done in the end. We have played a lot of cricket here. Weve had pitches like this. Its nice to get bowlers into the game as well at times. Its been batting-friendly all over, it was good to see bounce and swing from both sides which was good to watch. We are keeping one eye (on the future), we want to win games and at the same time we try out certain players. There are options that we still want to try. He (Tilak) has been brilliant, playing for the first year, having such a calm head is never easy. I feel hes going to be an all-format player for India pretty soon. Hes got the technique and temperament. And theres hunger as well. (On Bumrah) He knows what he needs to do and what the team expects him to do. He understands, magnificent spell upfront. (On Pollard) Hes been a stalwart, he came out and said that hes okay with that.Winning captain Rohit Sharma