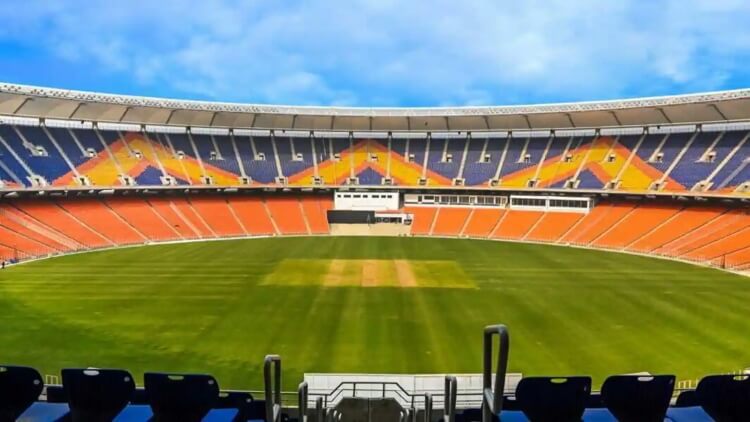 World largest cricket stadium in India, 7 of the worlds 10 biggest cricket grounds are in India

As of 2020, it is the largest cricket stadium in the world and the second-largest stadium overall, with a seating capacity of 132,000 spectators. It is owned by the Gujarat Cricket Association and is a venue for Test, ODI, and T20I cricket matches.

The Melbourne Cricket Ground has been the main venue for the 1956 Summer Olympics and the 2006 Commonwealth Games.

Raipur International Cricket Stadium is the third largest cricket stadium in India and the fourth largest in the world. It has a total seating capacity of 65,000 people. The first match was played here in 2010. During this, the Canadian national team came here to play a practice match with the Chhattisgarh state team.

Perth Stadium, also known by sponsorship rights as Optus Stadium, is a multi-purpose stadium in Perth, Western Australia, located in the suburb of Burswood. It was completed in late 2017 and officially opened on 21 January 2018. The stadium has a capacity of over 60,000 people, making it the second-largest stadium in Australia (after Melbourne Cricket Ground and Stadium Australia). The stadium can be expanded to 65,000 seats for rectangular games.

The Perth Stadium was built by a consortium led by Multiplex. The announcement of the Burswood location in June 2011 was followed by a series of earlier proposals for the stadium, including locations in Subiaco and East Perth.

Rajiv Gandhi International Cricket Stadium is a famous cricket stadium in Hyderabad. It is also home to the Sunrisers Hyderabad team.

This ground is in Hyderabad, the capital of Telangana state.
A crowd of 55000 spectators can enjoy the match together on this ground.

Greenfield International Stadium is Indias fifth-largest cricket stadium. Sports Hub, Trivandrum, commonly known as Greenfield International Stadium, and formerly known as Trivandrum International Stadium, is a multi-purpose stadium in Kerala, used primarily for association football and cricket. goes. The stadium is located at Kariyavattom in Thiruvananthapuram city, Kerala, India. It was built on 36 acres of land leased by the University of Kerala for a period of 15 years at Rs 94 lakh per annum. It is Indias first DBOT (Design, Build, Operate and Transfer) model outdoor stadium. The Greenfield Stadium became Indias 50th international cricket venue on 7 November 2017 when it hosted a T20I against New Zealand. On 1 November 2018, the venue hosted its first ODI.

M. A. Chidambaram ground has always been lucky for two of Indias greatest batsmen, Sunil Gavaskar and Sachin Tendulkar. Sachin has even described Chepauk as his favorite cricket ground. In Chepauk, Sachin has scored 970 runs in 10 Test matches with the help of five centuries and two half-centuries. Here his average is 88.18. Sachin has also been out for zero twice. At the same time, Sunil Gavaskar has scored the highest 1018 runs in 12 Test matches at this ground and is at number one among the batsmen with the most runs in Chepauk. Sachin was just 38 runs away from breaking Gavaskars record for most runs in Chepauk.

Click to know more about M. A. Chidambaram Stadium

The JSCAs decision to build a new cricket stadium in Ranchi was due to a dispute with Tata Steel, regarding the allocation of international matches and the holding of matches at Keenan Stadium.

The conflict came after an international match between India and England was moved to Bangalore, with JSCA stating that they had not received any response from Tata Steel. Following this, the JSCA decided that a new stadium was needed. JSCA Stadium is constructed by M/s Ram Kripal Singh Construction Pvt Ltd, Ranchi, Jharkhand. As the Jharkhand State Cricket Association is a full member of the Board of Control for Cricket in India (BCCI), it organizes international matches in the state, but JSCA does not have any international cricket stadium, only Keenan Stadium, [4] which is Jamshedpur. It was owned by Tata Steel. Therefore, it was decided to build its own international cricket stadium in Ranchi, the capital of Jharkhand.

The stadium is built within the premises of the public sector company HEC (Heavy Engineering Corporation). The stadium is the home ground of former Indian cricket team captain Mahendra Singh Dhoni.

The stadium has been constructed in such a way that no shadow falls on any of the nine pitches before 4.45 pm even on the shortest day of the year. There is another ground in the complex which has five pitches.