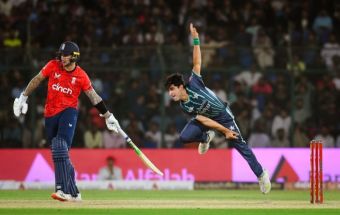 PAK vs ENG Match Preview, Head to Head All You Need To Know, Pakistan vs England Team Updates

England (ENG) managed to chase down the total by scoring fifty in the final over with veteran batsman Alex Hales on his return to the national side. Harry Brooke scored an unbeaten 42 off 25 balls to give England a big six-wicket win with four balls to spare. For Pakistan, Usman Qadir took two wickets and Haris Rauf and Shahnawaz Dahani took one wicket each.

Pakistan lost their last match against England after not being able to capitalize on the start they got in the opening. Pakistan scored 158 runs while batting first with in-form Mohammad Rizwan scoring the highest 68 runs and Iftikhar Ahmed scoring 28 runs. For Pakistan, Usman Qadir took two wickets and Haris Rauf and Shahnawaz Dahani took one each. Mohammad Rizwan and Babar Azam will probably open the inning. Haider Ali will bat at the one-down position. Shan Masood and Iftikhar-Ahmed will handle the middle-order batting. Babar Azam will lead Pakistan as a Captain. He is also a good Batsman Mohammad Rizwan will do the Wicket-Keeping for Pakistan. Usman Qadir and Iftikhar-Ahmed will take care of the spin bowling of his team. Haris Rauf and Shahnawaz Dhani will lead the pace attack of his team.

England won the opening match will an impressive all-round display to take a 0-1 lead in this seven-match series. For England, Luke Wood took three wickets on his debut and Adil Rashid grabbed two for 27. England managed to chase the total in the last over with veteran batter Alex Hales scoring fifty on his return to the national team. Harry Brook smashed unbeaten 42 runs off 25 balls to guide England to a big six-wicket win with four balls remaining. Alex Hales and Philip Salt will probably open the inning. Dawid Malan will bat at the one-down position. Ben Duckett and Harry Brook will handle the middle-order batting. Philip Salt will do the Wicket Keeping for England. Adil Rashid and Moeen Ali will take care of the spin bowling of his team. Luke Wood and Richard Gleeson will lead the pace attack of his team.

England and Pakistan have faced each other in 22 matches in T20Is. Out of these 22 matches, England has won 15 while Pakistan has won 6 times. 1 match ended without a result.

Mohammed Rizwan - In the last match, he played brilliant innings of 68 runs in 46 balls, in this match also the Pakistan team is expecting a good start from him.

Babar Azam - In the last match, he scored 31 runs in 24 balls but it could not convert a good start into a big score, in this match he can score big.

Luke Wood - In the last match for the England team, he took 3 wickets for 24 runs, in this match also he can present a good challenge to the Pakistan team with his bowling.

Alex Hales - He is the opener of the England team, in the last match, he scored 53 runs while batting brilliantly, in this match also he can contribute well with the bat.

Harry Brook - This young batsman of the England team won the match by playing an unbeaten inning of 42 runs in 25 balls in the last match, in this match also he will have a golden opportunity to prove his talent.

Also Read: Most hundreds in international cricket, Top 10 Cricketers with Most Century