IPL 2022, Controversial Umpiring: Rohit Sharma was not-out or out? 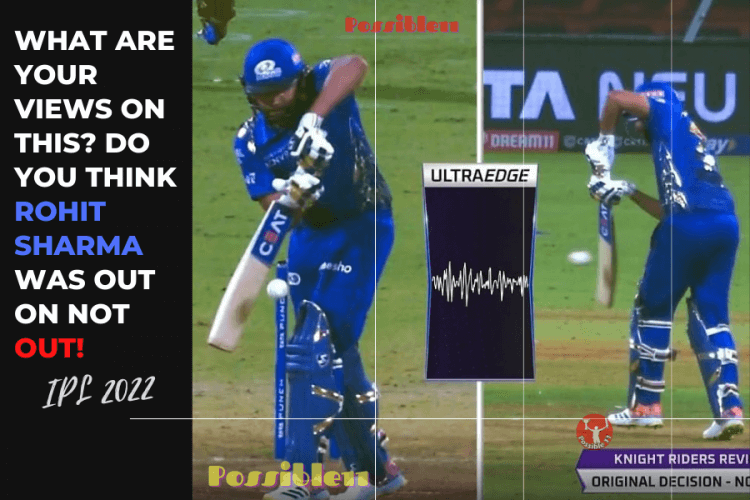 Kolkata Knight Riders vs Mumbai Indians, IPL 2022: MI skipper Rohit Sharma’s lean patch in the Indian Premier League continued as he was dismissed on just 2 against Kolkata Knight Riders on Monday at Dr. DY Patil Sports Academy, Mumbai. However, Rohit’s dismissal raised questions over the Ultraedge technology as some fans were unimpressed with the third umpire’s decision.

His dismissal, however, created a controversy as the majority of IPL fans felt that he was not out there and that the umpire hurried to take the final decision

In the review process, the television officially first checked the ultra edge to verify whether Rohit Sharma got the edge or not. The ultraedge showcased a huge murmur and the decision looked like a straightforward conclusion.

But a close look at the whole process was telling of an obvious technical glitch, as the murmur came on screen well before the ball hit the right-handers willow and stayed that way when the ball went closer to the bat, leading to massive doubts.

How can the third umpire not see what we saw? Rohit was NOT OUT #MIvsKKR pic.twitter.com/UbbUH2BVcc

Its a high time to bring back HOTSPOT to double check with Ultra edge. #RohitSharma? #MIvsKKR

When the worlds most cash rich cricket league cant afford a hotspot technology.

Forget about on field umpires third empires are being the worst this season.

Dear @BCCI @IPL Please get some good pairs of umpire who can hear and see properly! This type of bad umpiring its just wasting the hardwork and dedication of all the players this stuff will happen someday in IPL final or the last ball of a deciding match. #IPL2022 #RohitSharma pic.twitter.com/jrU12xW3Ni