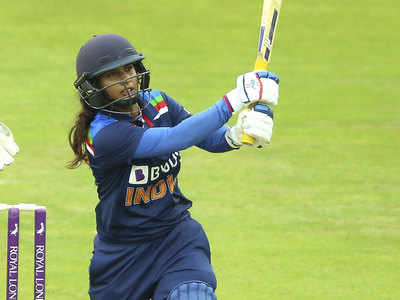 India womens ODI captain Mithali Raj did not take the field during Englands chase in the 2nd ODI between the two sides in Taunton on Wednesday. India posted 221 on the board with the skipper hitting her 2nd successive fifty in the ongoing ODI series

The Board of Control for Cricket in India ( BCCI ) confirmed that Mithali had suffered pain in her neck and did not come out to lead the side when India was defending the par total at the County Ground. Vice-captan Harmanpreet Kaur led the team.

"Captain Mithali Raj has pain in her neck and will not take the field. Vice-captain Harmanpreet Kaur will lead the team in Mithali’s absence. Radha Yadav is the substitute fielder," BCCI said in a social media post.

UPDATE: Captain Mithali Raj has pain in her neck and will not take the field. Vice-captain Harmanpreet Kaur will lead the team in Mithali’s absence. Radha Yadav is the substitute fielder.#TeamIndia #ENGvIND pic.twitter.com/aBWtL53pd0

Mithali Raj was seen getting medical attention at the dressing room during the 2nd innings. The 38-year-old played the one-off Test and the series opener against England women which also Indias first international assignment since a home series against South Africa earlier this year.

Mithali Raj once again held the Indian innings together even as they lost wickets in regular intervals after a solid start from their openers. Shafali Verma (44) and Smriti Mandhana (22) added 56 runs together in just 11.5 overs after India were asked to bat in their must-win match.

However, Jemimah Rodrigues who was included in the XI for the first time on the tour of England on Wednesday got out for 8.

Mithali Raj hit 59 from 92 balls but none of the other batters stuck around. Harmanpreet got 19 while the likes of Deepti Sharma, Sneh Rana and Taniya Bhati got out in single-digit scores. It was Mithalis 57th ODI fifty as the skipper continued her lone battle in the ODI series.

Thats the summary of the 2nd WODI. A spirited fightback by #TeamIndia but it wasnt enough. England win by 5 wickets. #ENGvIND pic.twitter.com/vdvxebGS72