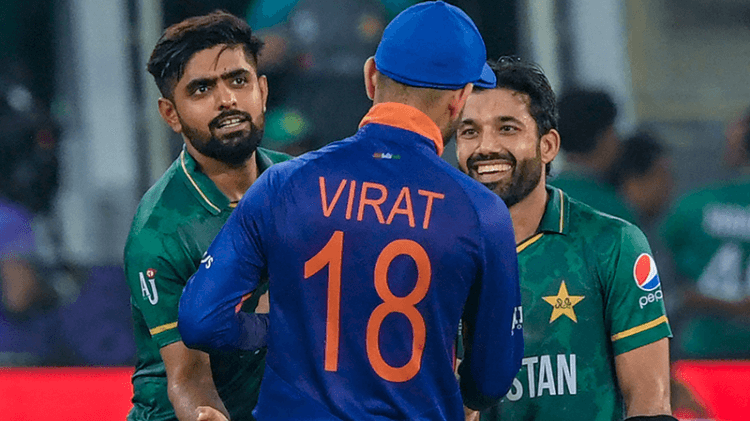 The clash between India and Pakistan has always been interesting and attention-grabbing. Whenever these two countries come out on the cricket field, everyone is waiting for this match. On 23 October again the eyes of the whole world will be on the cricket field because on this day these two teams will clash again in the match of ICC T20 World Cup-2022. India and Pakistan have locked horns against each other a total of six times in the history of the ICC Mens T20 World Cup, with India winning five of them. Heres a brief overview of each of those games and how both teams fared in those competitions.

With the whole world waiting and Melbourne gearing up to host 100,000 spectators for the competition, we take a look at the history of the India vs Pakistan clash over the years in the ICC Mens T20 World Cup.

India and Pakistan met in the T20 World Cup for the first time in the first edition of the World Cup of this format in 2007. In the match played in Durban on September 14, after playing 20-20 overs in this match, the score of both the teams was equal. Batting first, India scored 141 runs for the loss of nine wickets thanks to Robin Uthappas half-century and important contributions from MS Dhoni and Irfan Pathan. Pakistan would have guessed their chances to chase down the target, but the Indian bowlers did a good job of picking up early wickets. Even though Misbah-ul-Haq took the match away from India with a half-century, India tied the match on the strength of their bowling. After this, the match was decided in the ball out where India won.

In 2007, these two teams met again in the final. In the final match played in Johannesburg on 24 September, both the teams had a chance to win the first title. Gautam Gambhir played a scintillating 75 in the top order and another fine cameo from Rohit Sharmas unbeaten 30 helped India post a challenging 158-run target for Pakistan. After that from the Pakistan side, Imran Nazir got Pakistan off to a great start and scored 33 runs in just 14 balls. But the fall of wickets at regular intervals after being run out did not help Pakistan. Misbah-ul-Haq barely kept them afloat in the contest to take the match to the last over, with Pakistan needing 13 runs to win and India needing a wicket. The pressure came straight back on India when he hit Joginder Sharma for a six off the second ball of the last over, but he missed a scoop off the very next ball to hand Sreesanth an easy catch at short fine leg. With that wicket, Pakistan was dismissed and India became the inaugural T20 World Cup champions.

These two teams once again face to face in the 2012 T20 World Cup., this time it proved to be a one-sided match. India also won in the match played in Colombo, Sri Lanka on 30 September. Pakistan had batted first but was bundled out for 128 runs. Shoaib Malik scored 28 runs for him. Umar Akmal contributed 21 runs. Lakshmipathy Balaji claimed the bowling figures of 3/22 for India. Ravichandran Ashwin and Yuvraj Singh had two wickets each. India achieved this target by losing two wickets in 17 overs on the basis of Virat Kohlis unbeaten innings of 78 runs in just 61 balls.

Two years later, in 2014, both of them faced each other again on the ground of Dhaka. Batting first, Pakistan scored 130 runs for the loss of seven wickets. Amit Mishra bowled brilliantly and stunned the Pakistani batsmen with his wrist spin, registering figures of 2/22 in his four overs. No batsman could score a half-century from Pakistans side. Umar Akmal played the highest innings of 33 runs. India achieved this target in 18.3 overs for the loss of three wickets. Once again Virat Kohlis bat was on. He had scored an unbeaten 36. Suresh Raina also returned with an innings of 35 not out to win the team.

In 2016 the T20 World Cup was organized in India itself. This match was played at the Eden Gardens in Kolkata. Due to the delay in the start of play due to rain, only 18 overs per side were played. There was a lot of uproar about this match because Pakistan was playing in India and there was an earthquake in politics. Although BCCI was successful in getting this match in Kolkata, Pakistan could only manage a total of 118/5 run in their quota of overs as the Indian bowlers bowled tight lines and lengths throughout the innings. Batting first, Ahmed Shahzad played an innings of 25 runs. India had achieved this target in 15.5 overs. Virat Kohli bat again. He scored an unbeaten 55 runs and was adjudged man of the match.

After 2016, the T20 World Cup was held in 2022, but due to the Corona epidemic, this tournament could not be held. Pakistan finally broke their winning streak in the T20 World Cup against India as they registered a comprehensive 10-wicket win against their arch-rivals during their group-stage encounter in Dubai. After a rough start inspired by the new ball from Shaheen Shah Afridi, which claimed the wickets of both KL Rahul and Rohit Sharma, Kohlis bat as usual came back to life as Kohli scored a half-century and Rishabh Pants 39 invaluable contributions. India could make a total of 151/7 runs.

In the second innings, Mohammad Rizwan scored his brilliant half-century against India. Pakistan openers Babar Azam and Mohammad Rizwan displayed scintillating batting as they remained unbeaten on 68 and 79 respectively to chase down the target with 13 balls to spare.

IND vs PAK Head to Head

India and Pakistan (IND vs PAK) have faced each other a total of six times in the history of the ICC Mens T20 World Cup, with India winning five of them. and 1 Pakistan won which was a spectacular win by 10 wickets in the previous year 2021