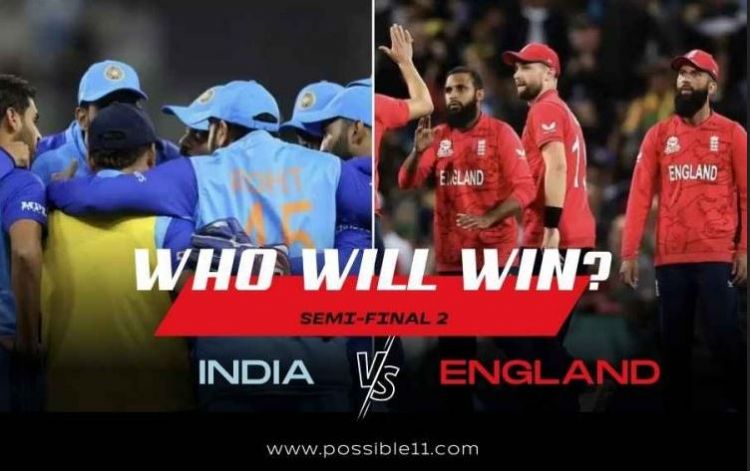 India defeated Zimbabwe in their final league game to advance to the semifinals against England, who defeated Sri Lanka in their final league game. The two teams will now compete for the final berth, but the journey from Adelaide to Melbourne will not be easy. Its been a while since the two teams won the championship, and theyll be eager to break the curse this year. Both teams have world-class players who can take over the world on any given day. It is expected to be an exciting cricket match.

With the ball gripping the surface, the pitch at Adelaide Oval is not the easiest to bat on. It was difficult for the batting second side, which is expected to behave similarly in the match between India and England. The winning captain will look to defend a total, so the toss will be crucial.

The Rohit Sharma-led team So far in the T20 World Cup 2022, India has been clinical. India finished first in their group after winning four of their five league-stage games. India defeated Zimbabwe by 71 runs in their final Super 12 match. Both with the bat and with the ball, the Men in Blue were clinical. While KL Rahul and Suryakumar Yadav scored half-centuries, the Indian bowlers worked in unison to dismiss Zimbabwe for 115.

While Bhuvneshwar Kumar and Arshdeep Singh struck early, Mohammed Shami and Hardik Panya struck in the middle overs. R Ashwin, who arrived late, also contributed three wickets. The only concern for India is that Rohit Sharma is not among the runners. India will benefit from wicketkeeper batters scoring runs.

England has had its share of problems, but they are finally coming together. Ben Stokes, who had been struggling to make an impact, played a match-winning knock of 42*. In his three overs, he also took a wicket. The lower middle order failed to deliver against Sri Lanka, but England will rely on Liam Livingstone and Moeen Ali to deliver against India in the crucial match.

The pace trio of Sam Curran, Chris Woakes, and Mark Wood has performed admirably thus far and will be crucial against India. Adil Rashid regained his rhythm and is expected to perform well in the middle overs against the likes of Suryakumar Yadav and Virat Kohli. However, England will undoubtedly miss Malan, who is questionable for the semifinal.

On paper, India appears to be strong and to be gaining momentum. Meanwhile, England will be disappointed by Dawid Malans absence.