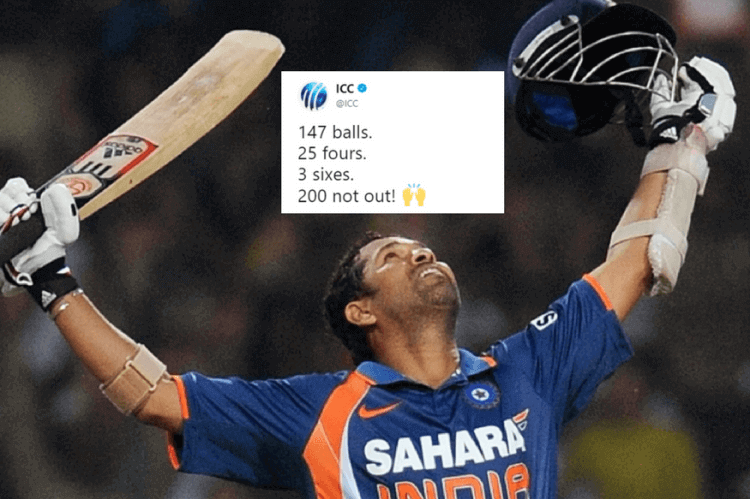 Sachin Tendulkar made history on 24 February 2010 against South Africa at the Captain Roop Singh Stadium in Gwalior. Sachin became the first batsman to score a double century in ODI cricket.

Sachin Tendulkar, one of the worlds greatest and most brilliant batsmen, started a new chapter in the history of cricket on this day on 24 February 2010. Known as the Lord of Cricket, Sachin achieved a new feat in cricket on this day and became the first batsman in the world to do so. The great batsman scored 200 not out in ODIs against South Africa at Gwalior on 24 February 2010. He became the first batsman in the history of world cricket to reach the 200-run mark in ODIs. Earlier, the record for making the highest individual score in ODI history was held by Pakistans Saeed Anwar and Zimbabwes Charles Coventry.

Sachin Tendulkar scored an unbeaten 200 off 147 balls with the help of 25 fours and three sixes in the second match of the three-match ODI series against South Africa on 24 February 2010. India had scored a mammoth score of 401 for three against South Africa in this match and then they won the match by 153 runs by reducing South Africa to 248 runs in 42.5 overs. Sachin got the man of the match award for his brilliant innings.

The legendary @sachin_rt etched his name in the record books as he became the first batter to score a double ton in ODIs (Mens). ? ? ? ?

Most double centuries in ODIs

The record of scoring 200 runs in the history of ODI cricket is the name of Indian captain Rohit Sharma. Rohit has so far scored 200 or more in ODI cricket three times. Out of these, he has achieved this feat twice against Sri Lanka and once against Australia. The record for making the highest individual score in ODI history is also in the name of Rohit, who played an innings of 264 not out against Sri Lanka on 13 November 2014 in Kolkata.