The Indian cricket team started its ICC mens T20 World Cup campaign against arch-rivals Pakistan on Sunday. The match is expected to be a high-octane affair and is being played at the Dubai International Cricket Stadium. As both the nations boast batting firepower in their side.

Rohit Sharma, who has scored four centuries in T20 International cricket, is also considered a good batsman in the short format of cricket. Rohit Sharma is not only a good batsman of this format but also a great captain and now under his captaincy the Indian team is going to participate in the Asia Cup 2022. In this tournament starting from August 27, India has to play the first match against Pakistan.

On a good day, the right-handed batsman can become a beast of a player and make even an experienced bowling unit look wet behind the ears.

However, against Pakistan in T20Is, the right-handed batsman hasnt been impressive. And his form continued at the Dubai International Stadium on Sunday, trapped LBW by Shaheen Afridi for a golden duck in the very first over of the match. The 21-year-old left-arm pacer then clean bowled KL Rahul to jolt India early in the innings and give Pakistan the perfect start as they look to register their first World Cup win against India. 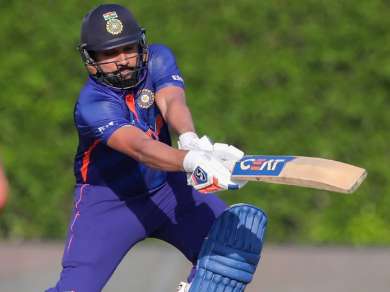 Rohit Sharma has played a total of 8 matches against Pakistan so far and he has been unbeaten twice in his 7 innings. In these 7 innings, Rohit Sharma has scored just 70 runs at a very simple average of 14. He has a strike rate of 127.27 in these matches and has been dismissed twice for zero. He has hit 6 fours and 3 sixes against Pakistan in T20 cricket. Obviously this record cannot be called good in any respect. In the 2007-2021 period, before Sundays encounter, the Hitman has played 7 matches against Pakistan and accumulated a total of 70 runs. His highest was an unbeaten 30; the average being 17.50.

Due to poor relations between India and Pakistan, both the countries do not play bilateral series, but both face to face in events like ICC and Asia Cup. Once again after the T20 World Cup 2021, both the teams are going to face each other in the Asia Cup 2022. In the last match played between the two countries in the T20 World Cup, India lost by 10 wickets to Pakistan and the captaincy of the team was in the hands of Virat Kohli. However, this time Rohit Sharma will captain the Indian team and his batting will also be monitored.