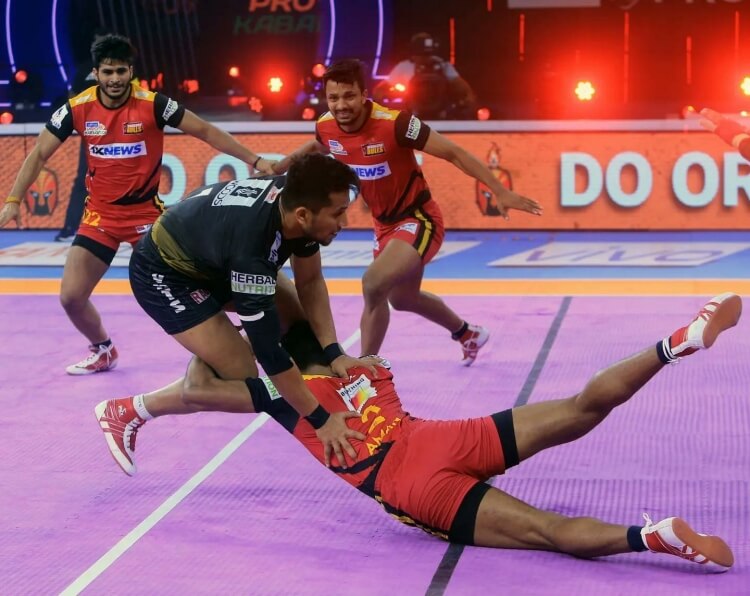 U Mumba will lock horns with the Bengaluru Bulls in Match 78 of the Pro Kabaddi 2022 on Wednesday, 26 January. The Sheraton Grand Whitefield Hotel and Convention Center in Bengaluru will host this contest.

U Mumba are currently placed seventh in the PKL standings with 36 points from 12 matches. They have registered four wins and three losses this season, while their remaining five games ended in draws.

Meanwhile, the Bulls are placed atop the points table with 46 points, having won eight out of the 14 games theyve played thus far. The Bangalore-based club have five losses and a draw to their name in the ongoing edition of the Pro Kabaddi League.

The Bulls won their previous encounter against the Telugu Titans by five points. U Mumba, on the other hand, also took on the Titans in their latest PKL fixture. They won the match 42 - 35.

Both sides head into this encounter on the back of a victory against the Telugu Titans and will look to extend their winning lead in Pro Kabaddi League 8.

Abhishek Singh:Abhishek Singh made a mark last season and has been effective this season as well. He came into the last game with vigour and put up an incredible show, scoring 15 raid points. The youngster has had a good season thus far and has taken his tally past the hundred mark with 101 points to his name from 12 games. He will be a pivotal figure in the game.

Rinku HC:It is always good to see youngsters rise to the occasion and Rinku has done just that. The right-corner defender has put in some fine performances lately, to take his tally to 30 for the season. He will be key in this game to thwart Pawans threat.

Fazel Atrachali: Fazel Atrachali is the experienced player in the side, holding the young guns together. He had a sluggish start to the season but has come into his own lately and has scored 25 tackle points, including 6 tackle points in the last game.

Pawan Kumar Sherawat: Pawan Kumar Sherawat is among the top raiders in the competition and has the ability to win games by himself. He was the top raider last season and his extravagant recent performances have ensured he reclaims the top spot this season as well. The Bengaluru man has taken his tally past the hundred and 50 mark with 186 points on the board, including 12 in the last game. He will look to produce another special effort tonight.

Saurabh Nandal:Saurabh has emerged as the leader of the Bengaluru defense and has played with panache. The right-corner defender has brought out his best this season and his tally for the season reads 43 tackle points and is the top-scoring defender for his team and 2nd overall. He will be a big threat for the pretty much one-man-dependent U Mumba raiding unit.

Aman:Aman has been another vital cog in Bengalurus defence. The youngster has put in some fine tackles and has even assisted his seniors in the side to ensure Bengaluru form a formidable defending side. The left-corner defender has 28 tackle points in 13 games, including 4 in the last game, and averaging over 2 per game.