PBKS vs MI, The thrill of IPL 2022 is progressing very fast. The 23rd match of this season will be played between Mumbai Indians and Punjab Kings (PBKS vs MI). Both the teams have been facing defeat in their respective previous matches and in this season, the team led by Rohit Sharma has broken all the records of defeat.

So far this team has played the first 4 matches and has suffered a crushing defeat in all four. At the same time, Punjab Kings is coming after winning 2 out of 4 matches. Obviously, in todays match, MI would like to taste their first victory in any case. On the other hand, the team captained by Mayank would like to start with a win once again. 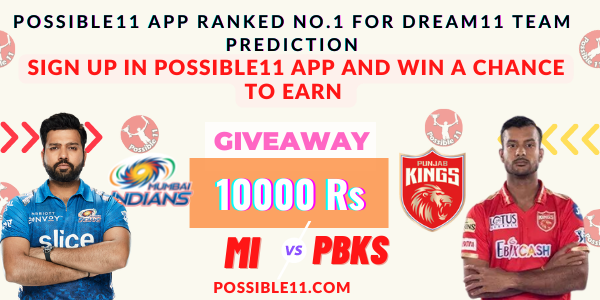 MI team would like to win against PBKS (MI vs PBKS)

Before this match between PBKS vs MI, talk about Mumbais most successful team in IPL history, so this franchise has performed quite disappointingly so far. This team, which lost its 4 matches back to back, had to face a crushing defeat at the hands of RCB in the last match. In this match, except Suryakumar Yadav, no player had a bat. At the same time, the foreign players associated with this team have also not performed well as expected, which is the main reason for the teams failure.

Despite going through a bad phase, the Mumbai team can go without any changes on Wednesday. The competition between these two teams has always been tough competition. But, this time the opposing team is seen in a different look with a different look and is determined to win. This time the performance of the team seems to be different from the rest of the season, which is fighting till the end to win. Therefore, if Rohit Sharma wants to open the account with victory in this match, then the bowlers, as well as the batsmen, will have to give their best.

In this match between PBKS vs MI, talk about Punjab Kings, in the last match it had to face defeat at the hands of Gujarat. The teams batsmen performed almost well in that match. At the same time, many mistakes and weaknesses were seen in the bowling order. Gujarat needed 2 sixes in the last two balls and Odion had the responsibility of the match in his hands. But, thanks to Tewatia, Gujarat Titans managed to put up a hat-trick of victory.

The rest of the bowlers were also seen struggling a lot to take wickets against Gujarat. Although Kagiso Rabada has performed brilliantly for this team which has won two matches so far and has almost lived up to the expectations. But, if to win this match against Mumbai Indians, then Mayank Agarwal will also have to give a great start and along with the rest of the batsmen, the bowlers will also have to understand their responsibility.

Before the match between Punjab Kings and Mumbai Indians (PBKS vs MI) at MCA Stadium in Pune, talk about the pitch here, it is very helpful for the bowlers and a good score is also seen on this ground. As seen in some matches played this season. The average of the first innings in T20 at this ground is 153 while the average of the second innings is 128. On this pitch, the last match of IPL 2022 was played between Mumbai Indians and RCB, in which the team with the red bold jersey won the chase.