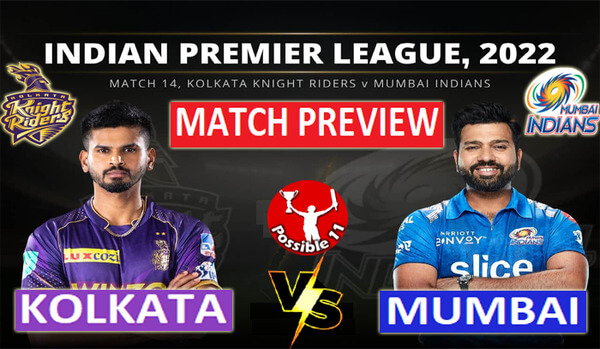 KKR had won two out of three matches played so far while Mumbai is still looking for a win in IPL 2022 Umesh Yadav (Purple Cap holder- most wickets-8 scalps in 3 games), Andre Russell (95 runs including an unbeaten 70 against Punjab Kings in the last match) and Shreyas Iyer (59 runs in 3 games) are in good form for KKR.

For MI, pacer Basil Thampi and spinner Murugan Ashwin have proved to be weak links as they yielded 73 runs in 3 overs during RR’s innings and the duo will need to produce a better show against KKR.

In fact, Australian seamer Daniel Sams too went for runs and remained wicketless in the last two matches. The trio will have to quickly recover from their forgettable outing against RR. Jasprit Bumrah, with his three-wicket haul, however, showed why he is the best in the business, particularly at the death and MI would be hoping for another stellar show from him.

For a turn-around, Rohit Sharma himself will have to be at his brutal best and hammer his favorite opposition, against whom he has a formidable record. Opener Ishan Kishan has been rock solid, smashing a brilliant 81 in the lung-opener followed by a gusty 54.

If Mumbai Indians have to post a big score or chase a big total, the opening duo would need to fire on all cylinders. MI has badly missed the services of Suryakumar Yadav, who is known for playing many match-winning knocks for the franchise. He has recovered from his finger injury but it remains to be seen whether he plays or not.

For KKR, Gautam Gambhir is the highest run-getter overall for the two-time champions. Gambhir, who played 139 IPL matches in his career, featured in 108 matches for KKR and scored 3035 runs at an average of 31.61. including 27 fifties. Gambhir, who was part of Delhi Daredevils (now Delhi Capitals) between 2008 and 2010, joined KKR in 2011 and stayed with the team till 2017 before joining the Delhi team once again in 2018. Under Gambhirs captaincy, KKR won their maiden IPL title in 2012 and went on to win the 2014 edition too. Gambhir is currently a team mentor for the Lucknow franchise. 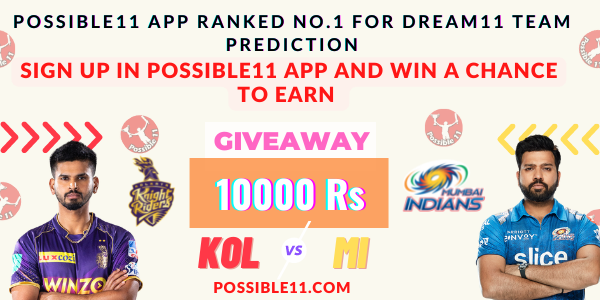 Sri Lankas speed-gun Lasith Malinga was a vital cog for Mumbai Indians from 2008 to 2019. In his 12-year stay at MI, Malinga led the teams pace attack from the front. He played 122 IPL matches for MI and claimed 170 wickets, including 1 five-wicket and 6 four-wicket hauls. He is the leading wicket taker for MI overall in the IPL Malinga bowling coach of the Rajasthan Royalstearn.

Sunil Narine joined KKR in 2012 and has been a regular feature for the Knights since then. He has played 137 matches for the two-time champions and claimed 145 wickets in his tenure so far. The mystery spinner has 1 five-wicket and 7 four-wicket hauls under his belt. He is the overall highest wicket taker for KKR in the IPL Narine is still an essential cog in the KKR wheel.

MI will be under pressure due to the defeat

In this match between Kolkata Knight Riders and Mumbai Indians (KKR vs MI), Rohit Sharma will try his best to open the account. But, for this, he has to go with the best playing XI. Every player has to give his 100 percent to win. In his first two matches, Hitman went with the same playing XI. But, there is bound to be a change in the playing XI of this match played against KKR. Because the team is already circumcising a hat-trick loss.

Suryakumar Yadav may return in place of Anmolpreet Singh. So far both the Suryas have been out of the match. His arrival in the team will strengthen the middle order and will also play the role of an experienced batsman. At the same time, Fabian Allen can be given a chance in place of Danielle Sams in the third match. In the last match against Rajasthan, Murugan Ashwin and Basil Thampi proved to be very weak links for the team. In such a situation, if the account is to be opened with a victory, then both these players will have to bowl with the right line length.

KKR will try to maintain the winning streak

Under the captaincy of Shreyas Iyer, the team would like to maintain the winning streak in this match between Kolkata Knight Riders and Mumbai Indians (KKR vs MI). In the last match, thanks to the swashbuckling innings of 75 runs by Andre Russell, the team had achieved a thrilling victory against Punjab. But, the rest of the batsmen had missed out on their role. So the batsmen will have to step up against Mumbai. Venkatesh Iyer and Rahane, who were flops in the last match, will have to give a good start to the team.

Skipper Shreyas Iyer is off to a great start but missing out on big innings, he can be expected to make a great inning with the bat. Umesh Yadav has bowled brilliantly with both new and old balls in all three matches so far. But, the rest of their bowlers will also have to help out. Apart from this, Sunil Narine and Varun Chakraborty will also play a special role in bowling. KKR has a team equipped with hitting batsmen and excellent bowlers. But, there is bound to be tough competition between the two teams.

It will be the third match of the season on this ground. Both the games have been won by the team batting first and the same might get repeated in this game. Batters have found it easy to score runs here and the bowlers will have to do a lot of work to have a chance in this game.