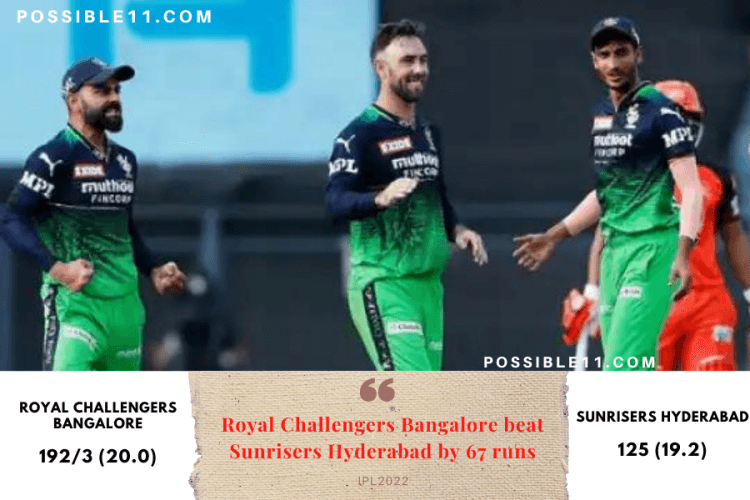 IPL 2022, SRH vs RCB Highlights: Leg-spinner Wanindu Hasaranga bowled brilliantly as he claimed five wickets against SRH to derail their run-chase and guide the team to a 67-run win. Despite losing early wickets, batter Rahul Tripathi hit a sublime fifty and kept SRH in the hunt for the 193-run target but SRH never really recovered from the two early blows in the first over the run-chase itself. They lost skipper Kane Williamson to a run-out and then Abhishek Sharma was removed by Glenn Maxwell. However, Aiden Markram and Rahul Tripathi brought some stability with a crucial partnership before the former departed for 21 runs. Pooran also departed soon by Hasaranga

When RCB and SRH played each other last time, RCB was all-out for 68. This time, they win by 67 runs. Earlier, after opting to bat first, RCB made 192 for three against SRH. Skipper Faf du Plessis top-scored for RCB with 73 not out off 50 balls while Rajat Patidar got 48 off 38. Dinesh Karthik remained unbeaten 30 off 8 balls.

Bangalore is currently isolated at the fourth spot with 14 points. Delhi Capitals, who are currently in fifth spot with 10 points, can bridge the gap if they defeat Chennai tonight!

"Im a wicket-taking bowler and the team also thinks like that. I try to bowl a lot of dot balls and try to get wickets. Thats my role in the team," Hasaranga said at the post-match media interaction after RCBs 67-run win over SRH.

With his fifer, Hasaranga (21 wickets) became the second player in this IPL to get past 20-wicket mark and he is currently at second spot behind Yuzvendra Chahal (22).

After dismissing Aiden Markram, Hasaranga returned to have the wickets of Nicholas Pooran and Jagadeesha Suchith in successive overs. He then finished off his spell with a double-wicket maiden.

"Im really happy with my position right now. I try to take wickets in middle overs, and put pressure on the opposition."This year, four players from Sri Lanka are doing really well, especially Maheesh Theekshana (Chennai), Dushmantha Chameera (Lucknow) and Bhanuka Rajapaksa (Punjab). For us our three main bowlers playing in this IPL, thats good experience for us when we go back to Sri Lanka," he said.