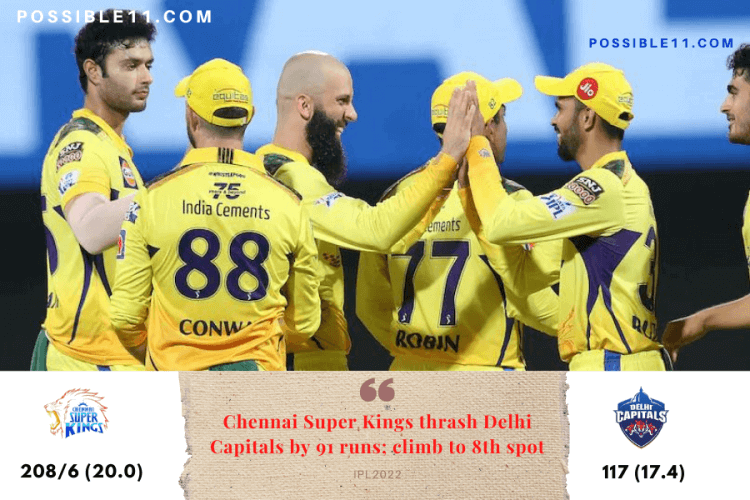 Devon Conway scored 87 runs in 49 balls, including his third consecutive fifty in IPL 2022 to get his side off to a flying start after Pant chose to bowl first. Late flurries from Shivam Dube (32 off 19) and MS Dhoni (21 off 8) ensured that CSK racked up a huge total of 208/6 in 20 overs.

In reply, Delhi Capitals fell some way short of the required target, as they succumbed to a huge 91-run defeat, thanks to Moeen Alis brilliant 3-wicket spell, as he gave away just 13 runs in the end.

RCBs win against SRH earlier in the day took them to 14 points in 12 matches. DC, SRH, and PBKS are all on 10 points (all have played 11 games each); and so, another loss for either of the three sides could potentially be the knock-out blow.

CSK, meanwhile, has climbed to the 8th spot. However, they will have to rely on plenty of results to go their way, while ensuring victories in all remaining games to ensure a chance of playoff qualification.

MS Dhoni, the skipper of Chennai says that a big victory helps and hopes it came a bit sooner but its never too late. Adds that the batters did well and it was a toss where you wanted to chase but you also felt like to just get out there and get runs and mentions that everyone contributed and the runs on the board always help. Mentions that both Simarjeet Singh and Mukesh Choudhary have matured a bit and sometimes it takes a few games and what is important is the ability but it all comes down to game sense and choosing which delivery to bowl when. Adds that he had a look at the first ball and doesnt like to go big from the start with just a few deliveries left, he decided to go big after ball one and adds that they have failed to accumulate quick runs down the order but it did happen tonight. On being asked about still having a chance to qualify, MS says that he isnt a fan of maths but admits that they do have a chance but the most important thing is to enjoy and get their combination right and prepare for the next season, if they do qualify then all well and good.MS Dhoni