IPL 2022: BCCI Likely To Have More Than 25% Capacity Of Crowd In Stand

The Board of Control of Cricket in India (BCCI) is planning to allow more than 25% of crowd capacity in the stadiums for the upcoming season of the Indian Premier League (IPL) 2022.

The IPL 2022 is set to be staged in Maharashtra- 55 league matches across three venues in Mumbai and 15 matches in Pune.

IPL 2022: There will be more fans in stadiums going forward: BCCI

The Maharashtra government has allowed one-fourth of the stadiums capacity for IPL games in the time of the COVID-19 pandemic. However, the BCCI is confident that the capacity will be increased as the tournament progresses as the cases have come down in the country. 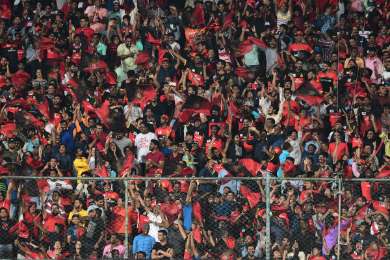 The BCCI had initially ruled out playing Indias first Test against Sri Lanka in Mohali with a crowd, but later reversed the decision as it was former Indian captain Virat Kohlis 100th Test match.

Defending champions Chennai Super Kings (CSK) will play the first match of IPL 2022 against Kolkata Knight Riders on March 26 at the Wankhede Stadium in Mumbai.