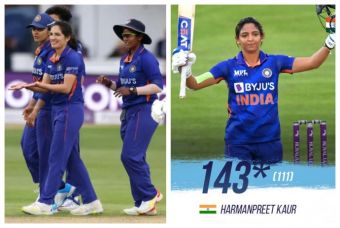 Indian womens cricket team defeated England by 88 runs in the second ODI. With this win, the Indian team has taken an unassailable 2-0 lead in the three-match ODI series. Team India has won the ODI series in England after 23 years. Earlier, India won the ODI series 2-1 in England in 1999 under the captaincy of Chandrakanta Kaul.

Batting first after losing the toss, Team India got off to a bad start. Shefali Verma was dismissed after scoring eight runs. After this, Smriti Mandhana shared a 54-run partnership for the second wicket with Yastika Bhatia. Yastika got out after scoring 26 runs. After this, Mandhana along with captain Harmanpreet shared a 33-run partnership for the third wicket. Mandhana scored 40 runs in 51 balls. With these innings, Mandhana became the fastest Indian player to score 3000 runs in ODIs. She broke former captain Mithali Rajs record.

Also Read: Most hundreds in international cricket, Top 10 Cricketers with Most Century