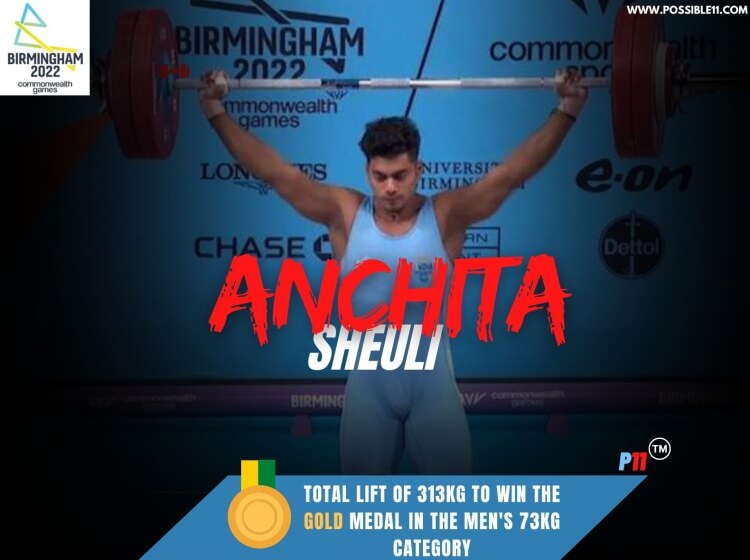 Weightlifters have been the star performers for India at the 2022 Commonwealth Games so far, and the trend continued on day 3 as 20-year-old Achinta Sheuli smashed the Games record by lifting a total of 313kg to win the gold medal in the mens 73kg category. Sheuli first broke the Games record twice in the Snatch round, lifting 140kg and 143kg. He then lifted 166kg and 170kg in the clean and jerk round to register a Games record for the overall weight.

Malaysias Erry Hidayat Muhammad, who gave Sheuli a tough competition, ended as the second-best lifter in the event. He had the best effort of 303kg (138kg 165kg).
Canadas Shad Darsigny was third with a total lift of 298kg (135kg 163kg).

Nothing really gives an impression that champions can be produced at this unassuming facility in Deulpur, roughly an hour from Kolkata. But this is where Achinta Sheuli – a junior world championship medallist, and national record holder who won India’s third gold medal at the Commonwealth Games on Sunday with a Games Record of 313kg (143kg in snatch, 170kg in clean and jerk) – began his journey.

“When I first saw Achinta, he was skinny and did not have the appearance of a weightlifter at all,” says Sheuli’s childhood coach Astam Das, who lives at this makeshift gym. “But he had speed which is very important for an athlete in any game.”

Beaming with confidence, the 20-yr old debutant #AchintaSheuli puts up a dominating performance to bag 3️⃣rd GOLD for ?? at @birminghamcg22

Sheuli then faltered his 170kg attempt only to heave the weight in the third attempt and create a new Games record in the total lift (313kg).

The Indian lifter had to wait patiently towards the end to find out what medal hed take home as the Malaysian attempted a 176kg lift in his last two attempts only to fail.
With the gold from Sheuli, the Indian weightlifting contingent has bagged its sixth medal of the Games.

Who is Achinta Sheuli?

The 20-year-old Achinta Sheuli took to weightlifting in 2010. By 2012, Sheuli had started winning medals at the district level. Coming from a humble background, the Indian weightlifter started training at a makeshift facility in a local farm and his brother Alok was a big factor in the success he had achieved in his career.

Sheuli went on to win the Khelo India Youth Games gold medal in 2018 and the following year won his maiden major medal at the senior level, clinching Gold in the Commonwealth Championships.

Achinta has been consistently improving at the highest level and won silver at the World Youth Weightlifting Championship in 2021 and followed it up with his second Commonwealth Championships gold medal in the same year.