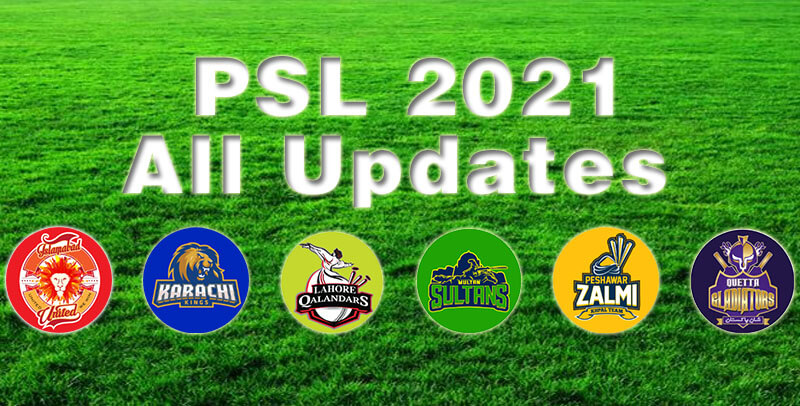 Get more details about PSL-2021

Pakistan Super League 2021 (also known as PSL 6 or for sponsorship reasons HBL PSL 2021) will be the sixth season of the Pakistan Super League, a franchise Twenty20 cricket league which was established by the Pakistan Cricket Board (PCB) in 2015. This will be the second season held entirely in Pakistan. A PSL executive confirmed that the sixth season will consist of same six teams with no plans for expansion. It is scheduled to be held in February and March of 2021. Starting from 2021, PSL will have a dedicated window in the ICC Future Tours Programme.

In June 2021, Pakistan Cricket Board (PCB) announced that they plan to add Arbab Niaz Stadium, Peshawar as a fifth venue in this edition of the PSL. However, delays in construction of the stadium may make it difficult to host the matches of the tournament. PCB also planned to hold few matches in Faisalabad and Hyderabad as well. Stadium in Hayatabad was also announced as a possible venue for some matches. In September 2021, the PCB confirmed that both the Arbab Niaz Stadium in Peshawar and Bugti Stadium in Quetta, would be unable to host this season's matches. However, it was later decided that the tournament will be held at only Karachi and Lahore. The stadiums will be allowed to host only 20% crowd out of total capacity per match; i.e. about 7,500 in Karachi and 5,500 in Lahore; in view of COVID-19 pandeiuc in Pakistan

All PSL matches will be played in 2 stadium of Pakistan: