The second match of the three-match T20 series between India and Australia (IND vs AUS) will be played on 23 September in Nagpur. In the first match, Australia defeated India by four wickets in a big-scoring match to take a 1-0 lead in the series.

In the second match, India would like to return to the series with the right team, while Australia will be eyeing a winning lead in the series.

If we look at the last few matches, the batsmen get a lot of help on this pitch, the average score has been between 161-171 runs on this ground. Lokesh Rahul and Josh Hazlewood can prove to be good options in this match as captain and vice-captain in the grand team.

IND team has more chances of winning the match. They seem to be a much stronger team in this match.

The main bowler Jasprit Bumrah has returned to the Indian team, which will give a lot of strength to the bowlers unit. On the other hand, Australia will be seen playing in this series in the absence of their key players David Warner, Mitchell Starc, and Mitchell Marsh but still there are players in the team who have the ability to win matches on their own. Would like to take a 1-0 lead in the series.

The pitch slows down a bit in the second innings, making it difficult to bat on. That's why 40 percent of the matches have been won while chasing the target.

Lokesh Rahul has so far played 2 International T20Is at the Vidarbha Cricket Association Stadium. Rahul has scored half-centuries in both the matches. He played here in the first T20 against England in 2017. In this match, he scored 71 runs in 47 balls. Rahul played the second match against Bangladesh in 2019, where he scored 52 runs in 35 balls. Lokesh can make Rahul the captain of your Dream11 team.

Virat Kohli Indian team's leading batsman Virat Kohli has given a befitting reply to his critics with his excellent batting in the Asia Cup and also scored the 71st century of his international career, in this series also he can do well with the bat.

Rohit Sharma His record against Australia in the T20 format has been excellent, he has scored 318 runs in 19 matches with a strike rate of 166, in this match he can be tried as a captain.

Suryakumar Yadav In the T20 format, he has emerged as the best batsman for India in the last few years, he has played many important innings for the team but has not been able to maintain this consistency so far, he will have a golden opportunity to prove his talent in this series.

Hardik Pandya He is the leading all-rounder of the Indian team, this year he has taken 12 wickets while performing all-round and has scored 331 runs in this match, he can prove to be a good option from the all-rounder section in the dream team.

Adam Zampa In the main spin bowler of the Australia team, he has taken 7 wickets against New Zealand, performing excellent bowling, and has taken 71 wickets in the T20 format, spin bowlers also get help on this ground, so it is necessary to be in their dream team.

Steve Smith In the ODI series against New Zealand, he has scored 167 runs in 3 matches, his record against India has also been very good.

Glen Maxwell In the T20 format, he is the most important player of the Australian team, he is a very explosive style batsman as well as plays the role of the sixth bowler in the team, in this match, the inclusion of him in the dream team on behalf of the Australia team proves to be the right decision. could. 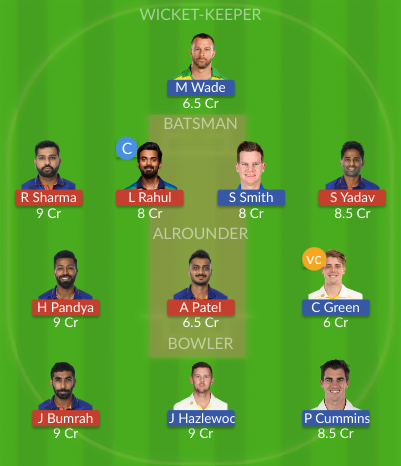