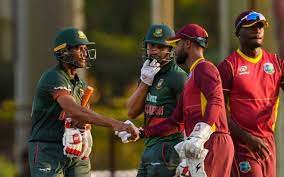 West Indies vs Bangladesh 2nd ODI Highlights: Bangladesh defeated West Indies by nine-wicket to win the second ODI and take an unassailable 2-0 lead in the series. Bangladeshs array of spin bowling talent combined to skittle the West Indies for just 108 with the visitors now heavily favored to complete a series-clinching victory in the second one-day international of a three-match series at the Guyana National Stadium on Wednesday. Off-spinner Mehidy Hasan Miraz led the rout with figures of four for 29 while left-arm slow bowler Nasum Ahmed claimed three for 19 as the home sides batsmen once again appeared all at sea on a pitch that offered considerable assistance to the spinners. Beaten by six wickets in the first match at the same venue on Sunday, West Indies tried to build a more stable platform after predictably being put in to bat by Bangladesh captain Tamim Iqbal. Later, Bangladesh chased down the target in just 20.4 overs

That’s it! Bangladesh has done the job and takes the series 2-0 with a match to play. This has been a clinical performance by the visitors and Tamim has every reason to be proud of the way the Bangla Tigers have played in the series.

They: What hurts the most?

Nicholas Pooran, the West Indies captain says it was a tough day and does not really want to talk about it. Says that they need to chat about what went wrong and work out what is going wrong. Says they need to apply themselves while batting and the team are like a family and they will work it out together. He informs that they have not been able to score more than 200 runs recently and they are a young group and will figure it out soon. Accepts that they need to bat properly and get a good total on the board and says more they play and stick together they will get better. Says the need to keep fighting and overcome the challenges and eventually figure out a way to win.

Tamim Iqbal: At the beginning of the series I told this in one format we are really proud and played really well. And we lost test and T20 series, dressing room wasnt the happiest. Everyone wanted to win. This is really good, there are lot of areas we need to tick boxes. 2023 World Cup probably will be one of the biggest event for all of us, especially four of us who most likely end there and we have to make the bets possible combination and best possible team going forward. Even in the test matches whatever runs I got I was batting well, what wrong I did was I didnt make big. I take it very simple, I just go with the rhythm and see what the situation is, for now its going well for me. On Nausm, hes brilliant. When Shakib is here, he doesnt get a game, I think he bowled unbelievably, used the conditions very well.