Vinesh Phogat suffered a quarterfinal defeat in the Tokyo Olympics.

Felicitations are erupting in different corners of the country as India welcomes returning heroes, back from its most successful Olympics . While triumphs are dedicated to all the pretty prose, in darkened corners and silent homes, there is the noise of shattered dreams clinging to pieces, when non-medallists relive how things went wrong. The phone stopped ringing after her exit from Tokyo, as she beat back the deafening sound of silence. Wrestler Vinesh Phogat , who faced heartbreak at the Olympics, pens down her tearful thoughts.

Vinesh Phogat breaks silence:- I feel like I am sleeping in a dream and nothing has even begun. I am blank. I don’t know what is happening in life. For the last one week, so much has been going on inside me. It’s a story of two hearts, two minds. I have given everything to wrestling and now is the right time to leave. But on the other hand, by chance I leave and don’t fight, it’ll be a bigger loss for me.

Right now, I really want to focus on my family. But everyone outside is treating me like I am a dead thing. They write anything, they do…. I knew that in India, you fall as fast as you rise. One medal (lost) and everything is finished.

Forget wrestling, let a person be normal. Fellow athletes don’t ask you what went wrong, they tell you what I did wrong. I am shocked that they form their own perspective. At least ask me what happened to me on the mat. Why are you putting words in my mouth that I felt a certain way? I didn’t. Sorry.

Also Read: Ravi Shastri Might Not Continue As Head Coach Of Indian Team 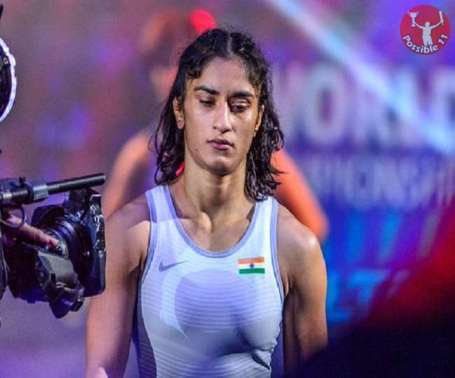 Vinesh Phogat was b banned by the Wrestling Federation of India for staying and training away from the team. (FILE)

I was on that mat. I know what I felt and what I didn’t. No one knows it better than me. If what you think you saw was actually how things were, then you could explain the entire meaning of life.

I don’t care about the world. But they still try to break me. I want to analyze my loss. After Rio, I cared about going back to the mat when everyone said I was finished. Why is Tokyo not my decision?

At the Olympics, no athlete is not under pressure. I was also under pressure in Tokyo, in Rio. But I know how to handle it. I could not do it in Rio but here I did. And I will do it again. Vinesh did not lose because of pressure. Before passing judgments, just ask the athlete what went wrong.

I was okay in Tokyo. I prepared for the humidity, I had salt capsules, I drank electrolytes. I just wished this problem would not arise. But when it rains, it pours.

I had a concussion in 2017, since then I have suffered from it. Things become blurry. It has gone down a lot but when my head strikes on anything, it comes back.

Maybe it was that. Maybe it was the blood pressure. Maybe the weight cut. I’m used to salt capsules. They helped a lot. But they did not work in Tokyo where I was alone.