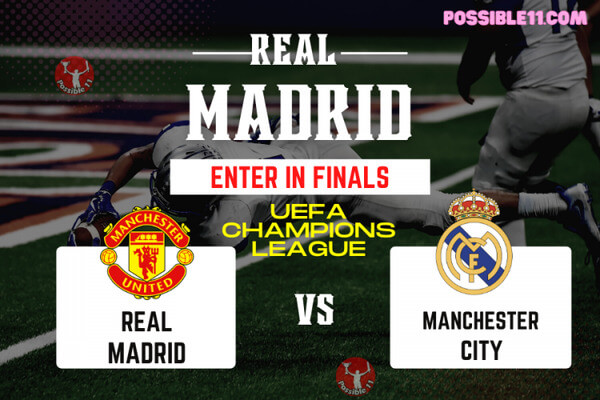 Karim Benzema scored an extra-time penalty as Real Madrid pulled off another astonishing comeback in the Champions League to stun Manchester City 3-1 on Wednesday and book a showdown with Liverpool in the final. City looked certain to go through when Riyad Mahrez put them 1-0 up and 5-3 ahead on aggregate but Rodrygo, on as a substitute, scored an incredible late double, his goals in the 90th and 91st minutes sending the tie to extra time.

Madrid trailed 1-0 on the night and 5-3 on aggregate heading into the 90th minute after Riyad Mahrezs 73rd-minute goal looked set to send City to their second successive Champions League final. But, as dramatic comebacks against Paris Saint-Germain and Chelsea have already shown in this seasons competition, Madrid is never to be counted out.

"When everyone thought the game was over, it was enough of a good combination," Ancelotti said. "We put all our energy into it. To win you need a bit of luck.

"They were a very tough opponent, but the team never gave up. We had everything: sacrifice, luck and energy. It was an intense match that we played very well.

"Something strange has happened in this Champions League season. We have played against very strong teams, against all the strong teams.

"The credit goes to the players and to the fans who push, push and push... The weight of the shirt and the pride of the club also play a part."

The Italian will face familiar opponents in Liverpool, having lived on Merseyside as Everton boss. He made reference to his Toffees past when told that Mohamed Salah had said he wanted to face Real Madrid in the final.

"The feeling I have is that I am very happy to reach the final," Ancelotti said. "Again against Liverpool, which is three Champions League finals as a manager against them.

"I lived in Liverpool for two years, and its a derby for me.