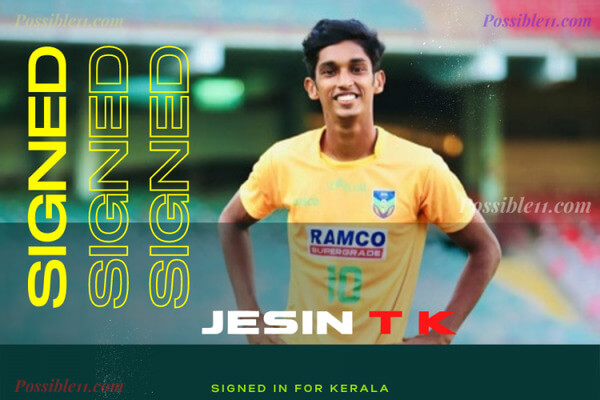 On April 28, Jesin T K, a 22-year-old Keralan, became the states latest football star after hitting five goals in his teams 7-3 victory after stepping on as a substitute.

Mohammed Nizar, his father who has been a driver by occupation is his strongest supporter. Last week, when Kerala faced Karnataka in the Santosh Trophy semifinal, Nizar yearned to be in the stands to witness his son play. However, by the time he finished his days travels, it was too late to make it to the stadium on time. Later, he noticed it on the live feed.

Auto driver’s dream turns real: When Kerala faced Karnataka in the semi-finals of the Santosh Trophy on Thursday, Mohammad Nisar wanted to watch this match from the stands. But this auto driver of Mallapuram could not finish the work on time, due to which he could not enjoy the match. Mohammad Nisar was eagerly waiting for this match, as his son, Jessin TK was part of the Kerala team.

Jesin is now the first player to score five goals as a substitute in Santosh Trophy history. He is also the new owner of the Kerala record for the most number of goals in a game in the tournament — previously held by Asif Saheer, who had scored four against Bihar in the 1999 edition.

Jesin was brought on in the 30th minute against Karnataka when the hosts were trailing by a goal. After showcasing his speed to get to a through-pass, the striker leveled the score within four minutes by lifting the ball over the onrushing goalkeeper. Then, he struck again in the 42nd and 44th minutes to secure a hat-trick within 15 minutes and set Kerala on their way to an easy win before scoring two more goals in the second half.

Jesin, who represents Kerala United, says he owes his performance to Bino George, the Kerala coach who also guides the club and coaches at MES College in Mampad where he is pursuing graduation in Arabic.

"I have never been a part of any district team. But I got the chance to play Kerala Premier League, I-League second division and now Santosh Trophy due to my coaches at MES, Murugan sir, Rafeeq sir, and George sir," he said.

"When Jesin was a child, managing my meager earnings as an auto driver was challenging, and I went to the Gulf for several years and worked there. During that time, my mother (Aamina) used to take him to a football academy in Nilambur. She had a desire to watch him become a footballer just as much as I did. Unfortunately, she passed away when he was in the eighth grade. She would have been so happy today," Nizar stated.

Jason TK’s father Mohammad Nisar is an auto driver by profession. He watched this match on mobile. Now Kerala is competing with Bengal in the final of the Santosh Trophy. This time Jessin TK’s father will not repeat the previous mistake and will go to the stadium to watch the son’s match with the whole family after finishing the work in the day itself. For them, it is the biggest day of their life.

In a conversation with ‘Indian Express’, Jessin TK’s father Mohammad Nisar said that I myself wanted to become a footballer. But I was not focused. I kept playing different sports like athletics, basketball, and kabaddi and in the end, could not make my career in any. There was no one to show me the right path. He said Jessin TK was also good at athletics. But I had given a piece of advice to my son that he should focus on only one thing at a time and I am glad that he remained associated with football.