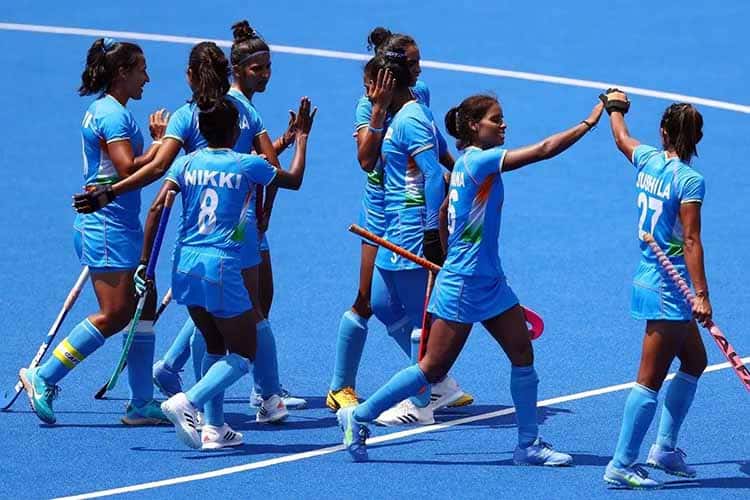 After the mens hockey team earned the first Olympics medal for India in 41 years yesterday, the Indian womens hockey team will be looking to make it to the podium for the first time at the Games today as they take on Great Britain in the bronze medal

AND THE MATCH IS OVER! GREAT BRITAIN BEATS INDIA 4-3 TO WIN THE BRONZE MEDAL AT THE TOKYO OLYMPICS!!!

56 Great Britain has made a whopping 23 attacking circle penetrations as opposed to Indias nine today. Sjoerd Marijnes side has to go all-out attack from here, maybe take out the goalkeeper.

52 India down to 10 yet again. Sharmila Devi is green carded by the umpire and sent to the dugout. But, just moments later, the Indians win a PC. Gurjit Kaur takes it and doesnt score the equaliser.

THE FOURTH AND FINAL QUARTER IS UNDERWAY!

THE THIRD QUARTER IS OVER!

44 WHAT A SAVE! WHAT A BLOCK! Indian shot-stopper Savita Punia makes her sixth save of the game as Elena Rayer fails to find the back of the net. The rebound falls to Lily Owsley, but her shot is blocked by Neha Goyal as India initiates a counter-attack.

A double from Gurjit Kaur and a strike from Vandana Katariya cancelled out goals from Elena Rayer and Sarah Robertson as India came from 0-2 down to hold a 3-2 lead over Great Britain at the end of the first half. Thirty more minutes to go. Stay tuned!

THE SECOND QUARTER IS DONE AND DUSTED!

29 GOOOAAALLL!!!! INDIA TAKES A 3-2 LEAD!! Vandana Katariya scores her fourth goal of the tournament. Sushila Chanu sent a cross from the left. Sharmila Devi wasnt able to control it. The rebound fell to Navneet Kaur, who completely missed the ball. Vandana eventually got to it and slotted it home.

26 GOOOAAAALLL!!! GURJIT KAUR SCORES AGAIN AS INDIA EQUALISES!! This was another Indian PC and Gurjit went for a drag flick on the same direction as the previous goal -- towards the left of British keeper Maddie Hinch.

25 GOOOOAAAAALLLL!!!! INDIA PULLS A GOAL BACK!! Gurjit Kaur, Indias lead drag-flicker, scores for a third consecutive game at the Tokyo Olympics. The Indians had won back-to-back penalty corners and Gurjit converted the second one with precision.

24 GOAAAAALLLL!!!!! GREAT BRITAIN 2 - 0 INDIA!!! The British players make maximum use of their numerical advantage. Shona McCallin rushed to the middle from the right and set up Sarah Robertson inside the shooting circle. The latter executed a delightful finish to find the back of the net.

16 GOOOAAAALLLL!!!! GREAT BRITAIN TAKES A 1-0 LEAD!! Forward Elena Rayer came up with brilliant run on the right flank. She evaded tackles from a couple of Indian defenders, entered the circle and tried to pass the ball to a teammate. However, it hit the stick of Indias Deep Grace Ekka and went into goal.

THE SECOND QUARTER IS UNDERWAY!

Nothing to separate the two teams as the score stays 0-0. Three more quarters to go. Stay tuned!

15 Great Britain has clearly dominated the opening 15 minutes, when it comes to the possessional, attacking and passing stats.

12 DOUBLE SAVE! Indias custodian Savita stays solid yet again. She denied both Elena Rayer and Sarah Jones at close range. Britain could have easily taken the lead here.

10 Great Britain wins its second PC of the day, thanks mainly to Lily Owsley who entered the circle with pace. But the British players mess up the set-piece big time.

7 CHANCE FOR INDIA! Neha Goyal wins the ball in midfield and sprints up front. She attempts to send a cross into the middle from the right but gets dispossessed.

5 Great Britain has already won a penalty corner today. Giselle Ansley had come up with the drag-flick and Indian goalkeeper Savita Punia made a good save.

2 Navneet Kaur receives a pass from her skipper Rani Rampal and moves forward on the right flank. However, the British defence stays alert to win the ball back.

Hockey: India vs Germany Indian mens hockey team is going to take on Germany in the bronze medal match. The match is scheduled to take place in less than an hour. Follow live score and updates of match on our live blog.

The team lineups are out!

Check out: how to earn free money in dream11