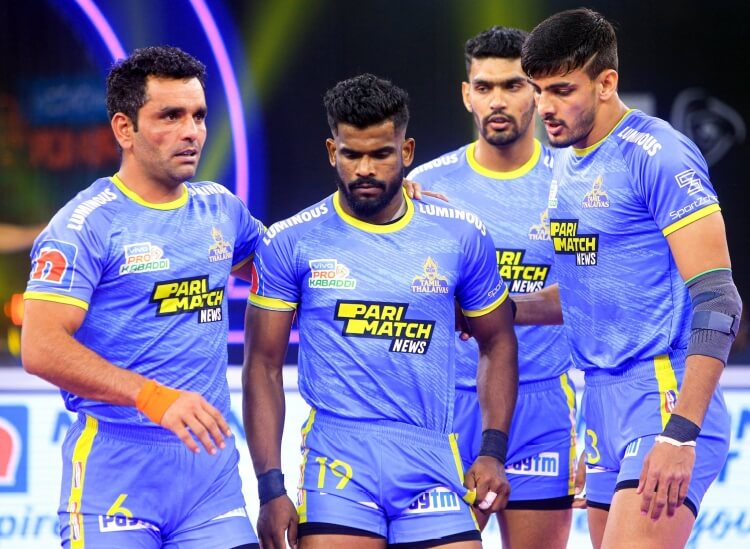 It is time for the South Indian derby as the Telugu Titans prepare to face Tamil Thalaivas in the 91st match of the Pro Kabaddi League 2022.

Tamil Thalaivas have been marred by inconsistency and their inability to close out matches has haunted them this season. They sit 10th in the points table with four wins, four losses, and sixties. The Thalaivas defeated the Bengaluru Bulls 42-24 in their previous fixture and will look to build some momentum with consecutive wins.

Meanwhile, the Telugu Titans are yet to turn up this season as they languish at the bottom of the league standings with only one win, ten losses and three tied matches. The Titans are winless in their last three games, including a 39-39 stalemate against the Haryana Steelers in the previous game.

Both sides shared the spoils after playing out an enthralling 40-40 draw on the opening day of the competition. However, the story has been different since then, and the Thalaivas will eye the top-four spot with a vital victory.

Rohit Kumar: Rohit Kumar is an experienced raider and has been a key part of many other sides in PKL over the course of 8 seasons. He hasnt played too much this season but has done well in the little time he has spent on the mat. He was brilliant in the last game as he scored 5 raid points and 3 tackle points Hed be looking to replicate that.

Sandeep Kandola:Sandeep Kandola has made a mark for himself this season with some fine performances. The left-corner defender has held the Titans defense and has scored 32 tackle points thus far. Hed be looking to thwart the attack of Maninder and Hegde tonight.

T Adarsh: Adarsh has come into his own in the last few games and has showcased what he is capable of. He had been quiet thus far but made the most of his recent raiding opportunities, which has seen his tally rise to 48 raid points and 2 tackle points. He will be high on confidence and will look to deliver yet again.

Manjeet: Manjeet had a sensational last season and has now emerged as the lead raider for the Tamil Thalaivas outfit. The youngster has had a bright season thus far with 107 raid points to his name. He doesnt shy away from putting in a tackle either and has 5 tackle points to his name. He had a poor last game and would be eager to bounce back.

Sagar: Sagar is a solid defender and came into the limelight in the last season. The right-corner defender has been aggressive in putting up tackles and has taken his tally to 54 tackle points, which sees him at the top of the list of top-scoring defenders, thanks to his 5 points in the last game and 12 in the last 2. He has been in terrific form and would hope he can continue the run.