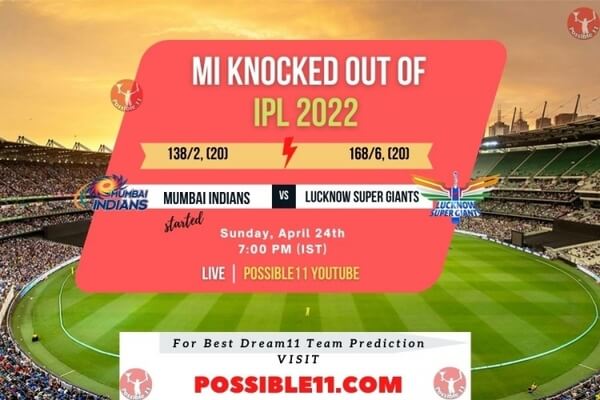 IPL 2022, LSG vs MI Highlights: Lucknow Super Giants on Sunday defeated Mumbai Indians by 36 runs in Match 37 of IPL 2022 at the Wankhede Stadium in Mumbai. Chasing a target of 169, MI got off to a good start but kept on losing wickets at regular intervals, and were restricted to 132 for 8. Rohit Sharma top-scored for MI with a 39-run knock at the top of the order. For LSG, Krunal Pandya took three wickets. Earlier, KL Rahul scored his second century of the season as LSG managed to post a total of 168/6 against MI. After being put onto bat first, Rahul slammed an unbeaten 103 off just 62 balls despite LSG continuing to lose wickets in regular intervals. For MI, Kieron Pollard and Riley Meredith took two wickets each.This is a new IPL record as no team has lost 8 matches on the trot in the league.

They are falling in a heap now. Jaydev Unadkat is run out as he goes for a single for which his partner Daniel Sams was not interested. Sams himself then holes out in the deep off the very next ball. MI is crumbling.

8th consecutive defeat for five-time champions Mumbai Indians. Krunal Pandya lets out a roar, wonder how happy MI fans will be to see that from their former player. MI has been completely outplayed here and it all ended in a bit of a farce in the last over. Rahul may have not gotten too much assistance from his batters but his bowlers and the fielding have been on the money tonight.