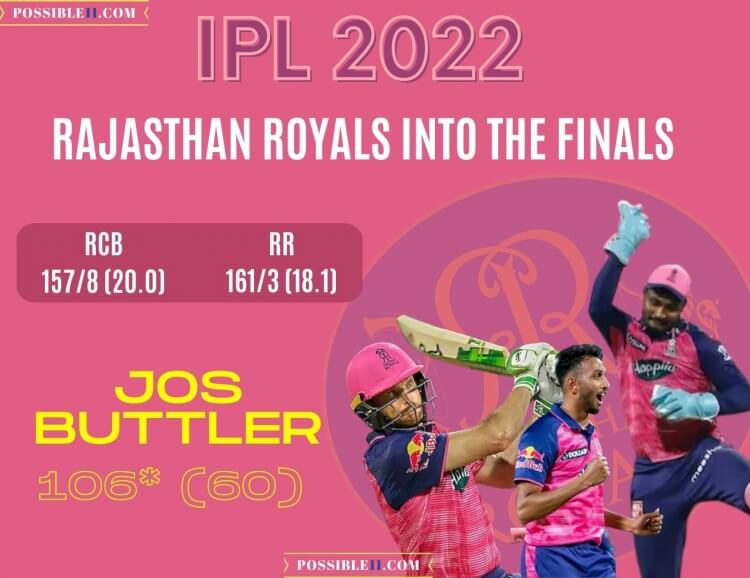 IPL 2022, RR vs RCB Qualifier 2 Full highlight: Rajasthan Royals on Friday entered the final of the Indian Premier League with a seven-wicket win over Royal Challengers Bangalore in the Qualifier 2 here. Jos Buttler top-scored for RR with 106 not out as they chased down the target of 158 with 11 balls to spare. For RCB, Josh Hazlewood was the most successful bowler with figures of 2/23. Jos Buttler slammed a ton after Prasidh Krishna and Obed McCoy picked up three wickets as Rajasthan Royals booked the finals berth with a seven-wicket win over Bangalore at the Narendra Modi Stadium in Ahmedabad. Rajasthan now faces Gujarat Titans in the final on Sunday night. Chasing 158 for the win, Buttler slammed his fourth century of the season to turn the game on its head. Buttler was assisted by Yashasvi Jaiswal, who slammed a quick-fire 13-ball 21 at the start. Sanju Samson also chipped in with 23 off 21 deliveries. Earlier, Patidar played with supreme confidence after high-profile openers Virat Kohli (7) and Faf du Plessis (25) failed to come up with impactful knocks.

Its all over! Buttler finishes off with a six, and Rajasthan Royals beat RCB by 7 wickets. They will play against Gujarat Titans in the final.

Faf du Plessis, the captain of Bangalore, says that they were a few runs short. Feels that the start against the new ball was a bit tough but then they got the momentum. Admits that Rajasthan bowled very well in the end overs. Shares that there was plenty of bounce on the surface and it perhaps eased out in the second innings. Adds that he is proud of his team and thanks all the fans for supporting them. Talks about Harshal Patel, Wanindu Hasaranga and Dinesh Karthik for their performances this season, and expresses his disappointment for not making it to the final. Lauds the effort of the backroom staff and is grateful for the kindness shown to them. Further says that they have a few young boys who can turn into superstars and they have a great future. Signs off by thanking the Bangalore fans and says that the support they got is truly remarkable.

Sanju Samson, the victorious captain of Rajasthan, says that it was really tough for them after the last loss but they are used to bouncing back. Adds that the pitch was a bit sticky and helping the fast bowlers. Mentions that his fast bowlers executed the plans really well and they closed the innings superbly. Tells that they believed in their skills and that got them through. Smiles and says that toss plays a role definitely as the wicket plays differently in the second innings. On Obed McCoy, Samson replies that he is a tough character and very calm and composed who backs his strengths. Regarding Jos Buttler, Samson hopes that he has one more big knock left in him. Talks about the first Indian T20 League and shares that he was very young that time.