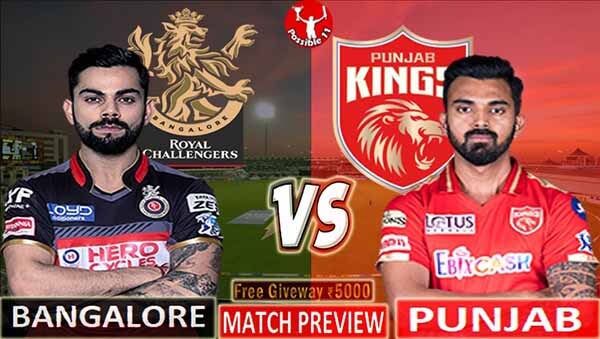 RCB vs PBKS Match Preview: With two more points, RCB will almost ensure a place in the play-offs. Punjab Kings registered a morale-boosting win against Kolkata Knight Riders in the previous match.

Royal Challengers Bangalore will look to cement their claim of a place in the play-offs in IPL 2021 with a win against Punjab Kings on Sunday. RCB, who are in search of their maiden IPL title, is in third place with 14 points from 11 matches with seven wins and four losses.

With two more points, RCB will almost ensure a place in the playoffs. Punjab Kings registered a morale-boosting win against Kolkata Knight Riders in the previous match.

Punjab Kings also kept their hopes of making the play-offs alive with a five-wicket win over KKR. The team, however, is fifth with 10 points from five wins from 12 matches. The team has faced defeat in seven matches.

However, the road for the Punjab team against RCB will not be easy. Skipper Virat Kohli may have failed to score big but he looked in fine form during the teams win against Rajasthan Royals. Kohlis young opening partner Devdutt Padikkal is also in good touch.

Both of them played some attractive shots after which star all-rounder Glenn Maxwell ensured the teams victory with a second consecutive half-century. Sreekar Bharat has also lived up to the expectation and in the last match, he shared a good partnership with Maxwell.

AB de Villiers provides strength to RCB in the lower middle order which other teams miss and the Punjab team is well aware of this fact. The team has bowlers like Mohammad Siraj, Harshal Patel, Shahbaz Ahmed, and Yuzvendra Chahal. Chahal has made a good comeback from the poor form, which has strengthened RCBs bowling attack.

Mohammed Shami and Arshdeep Singh played a key role in Punjabs win against KKR by bowling brilliantly in the death overs and they will look to replicate the performance against RCB.

Royal Challengers Bangalore (RCB) will face Punjab Kings (PBKS) in the Indian Premier League on Sunday. Both the teams have more than one attacking batsman. Therefore, it can prove to be a high point match in fantasy cricket as well. Lets try to know which players can prove to be important in this match.wicket-keeper For this match, the wicketkeeper of both Punjab and Bangalore can be included in the fantasy team. Lokesh Rahul has proved to be the top scorer for Punjab. At the same time, Sreekar Bharat of Bangalore is running in excellent form. AB de Villiers has the ability to turn any match on his own. In such a situation, you can choose three wicketkeepers. Rahul, Bharat, and de Villiers are the three wicket-keepers.

You can choose four batsmen for this match. One of them could be from RCB. Virat Kohli can be included in this team. The inclusion of Mayank Agarwal, Shah Rukh Khan, and Aiden Markram can be a good decision from the Punjab side.

The inclusion of Glenn Maxwell as an all-rounder can fetch good points.

Three bowlers can choose. Harshal Patel is the highest wicket-taker in the season so far. He is taking two-three wickets in almost every match. With him, Mohammad Shami of Punjab and Yuzvendra Chahal of Bengaluru can be chosen. Can include either Chahal and Ravi Bishnoi.

As captain and vice-captain, you can consider the top four batsmen of both teams.

RCB vs PBKS: if you lose money in dream 11 then join our Telegram channel where we provide a winning team of every match