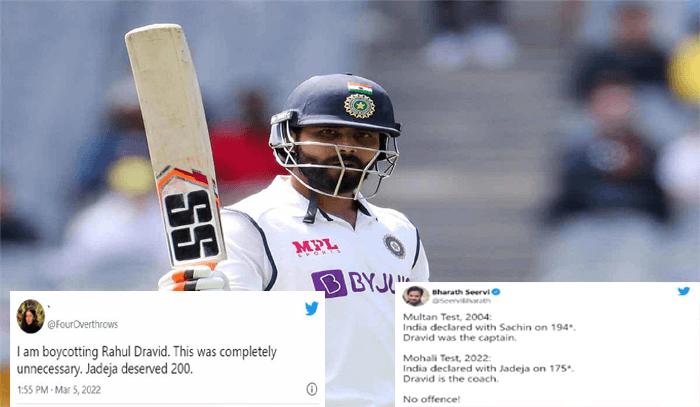 IND vs SL: People Targets Rahul Dravid As Ravindra Jadeja Is Left Stranded At 175 Not Out In Mohali

India declared its first innings at 574 for 8 on the second day of the Mohali Test against Sri Lanka (India vs Sri Lanka). Experienced all-rounder Ravindra Jadeja (Ravindra Jadeja) played the best innings of his career. Jadeja scored an unbeaten 175 off 228 balls. The left-handed batsman hit 17 fours and 3 sixes in 228 balls. Punjab Cricket Association (PCA) Jadeja dominated the stadium on Saturday. Ravichandran Ashwin (Ravindra Jadeja) played an innings of 62 runs in 82 balls. Shami returned unbeaten after scoring 20 runs. The way Jadeja was batting, it took a while for him to easily score the first double century of his career, but it did not happen.

When Jadeja was slowly moving towards the double century, then captain Rohit Sharma announced to declare the innings. After this the tea break was also taken. People have raised questions on the timing of declaring Rohits innings. On social media, fans are fiercely criticizing Team Indias head coach Rahul Dravid and Rohit. Fans say that Jadeja had a golden opportunity to score a double century, but the coach and captain did not allow it to be completed.

I am boycotting Rahul Dravid. This was completely unnecessary. Jadeja deserved 200.

Users are remembering the tour of 2004 when Team India was on a tour of Pakistan under the captaincy of Dravid. At that time Sachin Tendulkar was batting on 194 runs in the Multan Test match when Dravid surprised everyone by declaring the innings. Dravid was the captain at that time and is now in the role of coach. The user wrote, Would Rohit or Virat Kohli have declared the innings if Ravindra Jadeja was in place??? Another user wrote, I completely boycott Rahul Dravid, this is unfair. Ravindra Jadeja deserved a double century.

Jadeja is only the second cricketer from India to take 5000 runs and 400 wickets in international cricket. Earlier this record was in the name of former captain Kapil Dev. Kapil Dev played 356 international matches for India. During this, 9031 runs came out of his bat. Apart from this, Kapil also took 687 wickets.

Gautam Gambhir Said that maybe Jadeja should have said that he has 3 overs. In such a situation, if they want to complete a double century, then they can do so. But overall the teams interest comes first and India took a good decision to declare the innings. Winning is important for the team in terms of the World Test Championship (WTC). Rohit Sharma is making a new beginning as a Test captain from the match.

Simple Question:
If it was Rohit Sharma himself or Virat kohli in place of Ravindra Jadeja still they declared the innings??#INDvSL #jadeja #Cricket #SLvIND